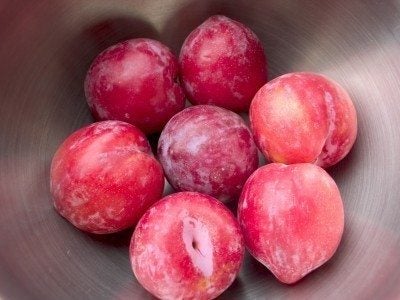 Plumcot fruit looks a lot like a plum, but one taste will tell you it’s no ordinary plum. High in nutrition and low in fat, this sweet fruit is great for fresh eating and for sweetening other foods. It’s a great tree for small properties because you only need one to produce fruit. Pluots are similar fruits. Let’s find out more about growing these hybrid fruit trees.

What is a Pluot?

Pluot is a registered trademark that belongs to California fruit breeder Floyd Zaiger. It is the result of several generations of cross breeding and works out to about 70 percent plum and 30 percent apricot. There are at least 25 different varieties of pluots. When other breeders or home growers crossbreed plums and apricots, they call them plumcots.

What is a Plumcot?

A plumcot is the result of crossing a plum and apricot tree. This 50-50 cross is the type of hybrid that you may find in the wild where plum and apricot trees grow near each other. Although anyone can cross-pollinate the two trees to create a plumcot tree, it takes skill and planning as well as trial and error to create a tree that produces superior fruit.

Growing plumcot trees is no more difficult than growing a plum or apricot tree. They grow well in any area where plums thrive. Plumcot trees are hardy in USDA growing zones 6 through 9.

How to Grow Pluots and Plumcots

Plant your tree in a location with full sun or light shade and well-drained, neutral or slightly acidic soil. When you set the tree in the hole, make sure the soil line on the tree is even with the surrounding soil. Press down on the soil as you backfill to remove air pockets. Water slowly and deeply after planting. If the soil settles, fill in the depression with more soil.

Fertilize the tree for the first time in late winter or early spring and again in late spring or early summer by spreading one-half pound (227 g.) of 8-8-8 or 10-10-10 fertilizer over the root zone. Gradually increase the amount of fertilizer each year so that when the tree matures you are using 1 to 1.5 pounds (454-680 g.) of fertilizer at each feeding. Plumcots also benefit from an annual spraying with zinc foliar spray.

Proper pruning leads to better fruit and fewer problems with disease. Begin pruning the tree while it is young. Limit the structure to five or six main branches coming off the central stem. This is more branches than you actually need but allows you to remove some later as problems arise. The branches should be spaced evenly around the tree and at least 6 inches (15 cm.) apart.

Remove diseased, broken, and weak branches any time of year and remove suckers from the base of the tree as soon as they appear. Do the main pruning in spring, just before the flower buds open. If two branches cross and rub against each other, remove one of them. Remove branches that grow straight up rather than out at an angle from the main stem.

Thin some of the fruit from heavily laden branches to prevent the branches from breaking. The remaining fruit will grow larger and taste better.