What Is A Saskatoon – Learn About Growing Saskatoon Bushes 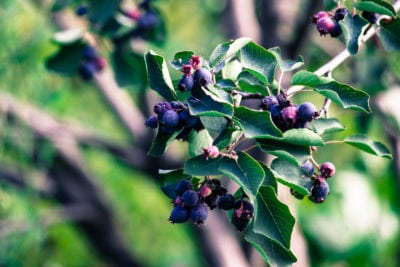 What is a Saskatoon bush? Also known as western juneberry, prairie berry, or western serviceberry, Saskatoon bush (Amelanchier alnifolia) is native to the area extending from the inland northwest and the Canadian prairies to the southern Yukon. Saskatoon shrubs are attractive plants that bloom in spring and produce scads of bluish purple Saskatoon berries in summer.

Saskatoon berries, with a flavor reminiscent of cherry with a hint of almond are rich in protein, fiber, and antioxidants. Saskatoon bushes generally reach heights of 6 to 10 feet (2-3 m.), depending on the cultivar. Similarly, fall color may vary from red to bright yellow.

A type of serviceberry, Saskatoon shrubs are especially valued for their cold hardiness, as this tough plant can survive numbing temperatures of -60 degrees F. (-51 C.).

Nearly any type of well-drained soil is suitable for Saskatoon bushes, although the shrubs don’t do well in heavy clay.

Begin with disease and pest free stock from a reputable nursery, as Saskatoon bushes are vulnerable to pests and disease.

Most Saskatoon bushes are self-fruiting, which means it isn’t necessary to plant another bush nearby. However, a second bush can sometimes generate larger harvests.

Amend the soil by digging in organic matter such as compost, grass clippings or chopped leaves. Don’t fertilize Saskatoon shrubs at planting time.

Water as needed to keep the soil moist but never soggy. It’s best to water at the base of the shrub and avoid sprinklers, as damp foliage makes the shrub more susceptible to fungal diseases.

Keep weeds in check as Saskatoon shrubs don’t compete well. Mulch the shrub to control weeds and keep the soil evenly moist. However, don’t mulch until late spring when the soil is warm and relatively dry.

Check Saskatoon bushes for pests frequently, as Saskatoon shrubs are vulnerable to aphids, mites, leafrollers, sawflies, and others. Many pests can be controlled by regular use of insecticidal soap spray.

Printer Friendly Version
Read more about Serviceberries
<Previous
Did you find this helpful? Share it with your friends!
FacebookTweetPinEmail
Related Articles
Newest Articles
You might also like…
Additional Help & Information