Sawfly Insect Control: How To Get Rid Of Sawflies 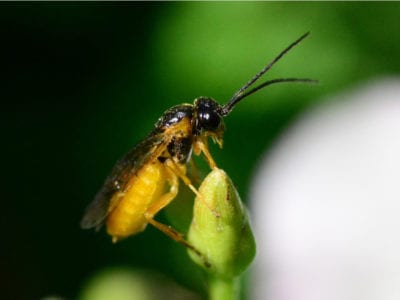 Sawflies get their name from the saw-like appendage at the tip of their body. Female sawflies use their “saw” to insert eggs into leaves. They are more closely related to wasps than flies, though they don’t sting. Sightings of adult sawflies are rare, but you may occasionally see them near flowers and flower buds where their offspring cause damage to the foliage. Keep reading for more sawfly information.

There are several types of sawflies and most are named for the type of plant on which they feed. Here are a few types that you may find in your landscape:

Sawfly damage is caused by the larvae that feed on the plants in several different ways, depending on the species. Some leave holes or notches in the leaves, while others skeletonize the leaves by completely devouring the tissue between the veins. They may roll up the leaves or spin webs. A few species leave galls on the foliage.

A light infestation may cause only a little cosmetic damage that is easily removed through pruning, while a large number of sawflies can seriously damage or even kill a tree.

How to Get Rid of Sawflies

The control of sawflies is directed at the feeding larvae. Each species of sawfly has its own distinct appearance and habit, and they change their appearance as they develop. Although a few species of sawfly have larvae that resemble slugs, most look like caterpillars. It’s important to learn the difference between sawfly larvae and caterpillars because the insecticides used to kill caterpillars have no effect on sawfly larvae.

The easiest way to tell the difference between sawfly larvae and caterpillars is to look at the legs. Sawfly larvae have three pairs of true legs, followed by seven or eight pairs of fleshy, false legs. Caterpillars have five or fewer pairs of false legs that are armed with tiny hooks.

Handpicking may be the only control measure you need to control light infestations. Sawflies have several natural enemies that keep them in check, including predatory beetles, parasitic wasps, and viral and fungal diseases. Avoid using broad spectrum insecticides that will damage the beneficial insect population. Good choices that are effective, but have little environmental impact, include insecticidal soaps and narrow-range oils.

Another aspect of sawfly insect control is directed at the pupa that overwinter in cocoons in the soil. Cultivating the soil exposes them to freezing weather and birds that feed on them. Cultivate the soil several times over the winter months, taking care not to damage the roots of dormant plants.