Watermelon Bottom Turns Black: What To Do For Blossom Rot In Watermelons 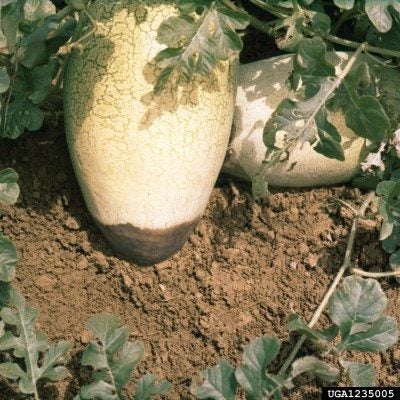 You know it’s summer when the watermelons have grown so big they’re almost bursting out of their skins. Each one holds the promise of a picnic or party; watermelons were never meant to be eaten alone. But what do you tell your friends and family when the watermelon bottom turns black? Sadly, your fruits have succumbed to watermelon blossom end rot, and although affected fruits aren’t treatable and probably aren’t palatable, you can save the rest of the crop with some fast modifications to the bed.

Why is Watermelon Rotting on Bottom?

Watermelon blossom end rot isn’t caused by a pathogen; it’s the result of fruit that lacks the correct amount of calcium to develop properly. When fruits are growing rapidly, they need lots of calcium, but it doesn’t move through the plant very well, so if it’s not available in the soil, they will be deficient. A lack of calcium ultimately causes rapidly developing cells in fruits to collapse on themselves, turning the blossom end of the watermelon into a black, leathery lesion.

Blossom rot in watermelons is caused by a lack of calcium, but simply adding more calcium isn’t going to help the situation. More often than not, watermelon blossom end rot occurs when water levels are fluctuating during fruit initiation. A steady supply of water is required to move calcium to these young fruits, but too much isn’t good, either – good drainage is necessary for healthy roots.

In other plants, excessive applications of nitrogen fertilizer can initiate wild vine growth at the expense of fruits. Even the wrong type of fertilizer can lead to blossom end rot if it binds the calcium in the soil. Ammonium-based fertilizers can tie up those calcium ions, making them unavailable to the fruits that need them most.

If your watermelon has a black bottom, it’s not the end of the world. Remove the damaged fruits from the vine as early as possible to encourage your plant to initiate new flowers, and check out the soil around your vines. Check the pH — ideally, it should be between 6.5 and 6.7, but if it’s under 5.5, you’ve definitely got a problem and will need to quickly and gently amend the bed.

Look at the soil while you’re testing; is it sopping wet or powdery and dry? Either condition is blossom end rot waiting to happen. Water your melons just enough that the soil stays moist, not wet, and never let water puddle around the vines. Adding mulch helps keep soil moisture more even, but if your soil is clay-based, you may have to mix in a considerable amount of compost at the end of the season to get good watermelons next year.