Removing Melon Fruit: How To Thin Out Watermelon Plants 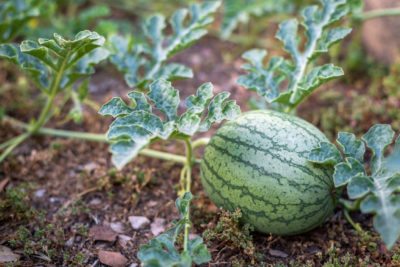 For me, thinning out any young seedling is painful, but I know it has to be done. Thinning out fruit is also a common practice and is done to engender larger, healthier fruit by reducing competition for light, water, and nutrients. If you want enormous watermelons, for example, then thinning the watermelon fruit is necessary, but the question is how to thin out watermelon plants? How many watermelons per plant should be left? Keep reading to find out all about pruning watermelons.

How Many Watermelons per Plant?

Watermelons can weigh as much as 200 pounds (90.5 kg.), but to get one that size, thinning watermelon fruit is a necessity. The vine simply does not have enough nutrients to foster more than one fruit of that size. This is where pruning watermelon plants comes into the picture, but removing melon fruit may have some downsides as well.

There are a few considerations before going off willy-nilly pruning a watermelon vine. Pruning promotes healthier vines and increased fruit size but if cutting the vines back too early, you may reduce the number of female blossoms. With no female blooms to pollinate, there will be no fruit. Pruning will also reduce the size of the vines, which can grow to over 3 feet (1 m.) in length.

Also, cutting back the plants may cause the vine to send out additional runners, which will then delay the fruit set, as the plant is now focusing on growing vines instead of developing melons.

As the vine begins to fruit, at first it may seem that you have a bumper crop awaiting you. Don’t thin or prune the vine just yet! Many of the young melons will shrivel and die off, leaving only the strongest melons to ripen. If that is your end goal, then there’s no longer any reason to prune the vine back.

How to Thin Out Watermelon Plants

Whether you want to rein in the size of the vine or you’re trying for a blue ribbon melon, thinning watermelons is an easy procedure. Using sharp gardening shears, first remove any diseased, dead, yellowing, or otherwise infested leaves and shoots at the joint, where they connect to the main stem.

At this time, also remove any secondary vines, those that are not blooming or look sickly. Leave one or two fruits on the vine if you want the largest melons or up to 4 for healthy, average-sized watermelon fruit.

Because watermelons are prone to diseases and parasites, don’t cut the vines when they are wet.