Watermelon Hollow Heart: What To Do For Hollow Watermelons 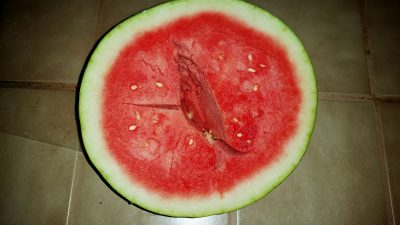 Slicing into a watermelon picked fresh from the vine is like opening a present on Christmas morning. You just know there’s going to be something amazing inside and you’re eager to get to it, but what if your watermelon is hollow inside? This condition, known as watermelon hollow heart, strikes all members of the cucurbit family, but a cucumber missing the center of its fruit is somehow less disappointing than when hollow heart in watermelons appears.

Why is My Watermelon Hollow?

Your watermelon is hollow inside. Why, you ask? It’s a good question and one that’s not exactly easy to answer. Agricultural scientists once believed that hollow heart was caused by irregular growth during key parts of the fruit’s development, but that theory is losing favor among today’s scientists. Instead, they believe that a lack of seed initiation is the cause of hollow watermelons and other cucurbits.

What does this mean for growers? Well, it means that your growing watermelons may not be getting properly pollinated or that seeds are dying during development. Since hollow heart is a common problem of early cucurbit crops and in seedless watermelons in particular, it stands to reason that conditions may simply not be right in the early season for good pollination.

When it’s too wet or too cold, pollination doesn’t work correctly and pollinators may be scarce. In the case of seedless watermelons, many patches don’t contain enough pollinating vines that set flowers at the same time as the fruiting plants, and a lack of viable pollen is the end result. Fruits will initiate when only a portion of the seeds are fertilized, but this usually results in empty cavities where seeds from unfertilized parts of the ovary would normally develop.

If your plants seem to be getting plenty of pollen and the pollinators are very active in your patch, the problem may be nutritional. Plants require boron to establish and maintain healthy seeds; a lack of this trace mineral may cause spontaneous abortion of these developing structures. A comprehensive soil test from your local university extension can tell you how much boron is in your soil and if more is needed.

Since watermelon hollow heart isn’t a disease, but rather a failure in the seed production process of your watermelons, the fruits are perfectly safe to eat. The lack of a center may make them hard to market though, and obviously, if you save seeds, this can be a real problem. If you have hollow heart year after year early in the season but it clears up on its own, you may be able to correct the situation by hand-pollinating your flowers. If the problem is consistent and lasts all season, try adding boron to the soil even if a testing facility is unavailable.