Watermelon Plant Not Producing: How To Get Watermelons To Fruit 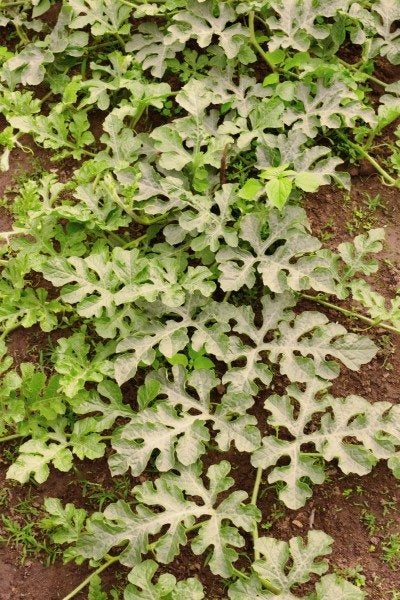 Watermelon is pretty much synonymous with summertime and is likely found at nearly every summer celebration from the Fourth of July, Labor Day, or Memorial Day BBQ to the company picnic. With such popularity, many people try to grow their own, and in so doing, encounter difficulties such as a watermelon plant that is not producing. The question then is how to get watermelon to fruit?

Help! Why is My Watermelon Plant Not Producing?

There may be a couple of reasons for no fruit set on watermelons. First of all, it’s a good idea to go over how to plant watermelon to eliminate any mistakes.

You’ll want to choose the variety of watermelon to plant. They come in all different sizes, from 3 pounds to over 70 (1-30 kg.) and with red to yellow flesh. A couple of the big boys are Jubilee, Charleston Grey, and Congo while smaller, globe shaped melons include Sugar Baby and Ice Box. Consult a watermelon production guide in a nursery catalog or online for other varieties.

Hopefully, you realize that melons in general adore sun and need to germinate at temps over 70 degrees F. (21 C.), with an optimal growing temperature of between 80 and 90 degrees F. (26-32 C.) in an area with eight hours or more of full sun. If your temps don’t get warm enough, black plastic can aid in warming the soil and you may need to go as far as building a greenhouse over the plants.

Either sow or transplant watermelon in soil that is loamy, fertile, and well-draining, till some compost into the soil. The soil pH should be between 6.0 and 6.8. Plant the watermelon in mounds spaced 2 to 6 feet (61 cm. to 2 m.) apart. Keep the soil moist during germination, which takes between seven and ten days. The plants should be mulched around the base once they are 4 inches (10 cm.) tall. This will aid in moisture retention, slow weeds, and keep the soil from overheating while the roots are young and tender.

If you’ve followed the above instructions for proper planting and still end up with no fruit set on watermelons, you probably have an issue with pollination.

How to Get Watermelon to Fruit

Since improper planting technique has been ruled out, the culprit for a watermelon plant with no fruit is likely incomplete pollination. Poor pollination is common among the cucurbit family, which includes:

Many cucurbits have both male and female flowers. The pollen from the male flower needs to be moved, usually by bees, to the female bloom. If there is insufficient bee activity, not enough pollen will be delivered to properly fertilize the female flowers. The result will be either no fruit or malformed fruit. The flowers can be pollinated by hand in the absence of bees. First, you must distinguish between the male and female flowers, which are both yellow. Female flowers are attached to the plant by what appears as an immature watermelon, while males are attached by only a thin greenish stem.

Once you have ascertained which bloom is which, using a small paint brush or even a cotton swab, gently remove the pollen from the male plant and transfer to the female. Place the pollen on the stigma, which is a raised area in the center of the open female flower. This is best done in the morning right after the flowers have opened.

Additionally, when initiating a watermelon or any cucurbit planting, it is a good idea to plant companion plants that attract bees nearby to even the odds for pollination.

In some instances, too much nitrogen fertilizer may be to blame. This results in abundant foliage growth with little to no flowering, which means no watermelon fruit. Adding a high phosphorus fertilizer or bone meal around your plants can help offset this.