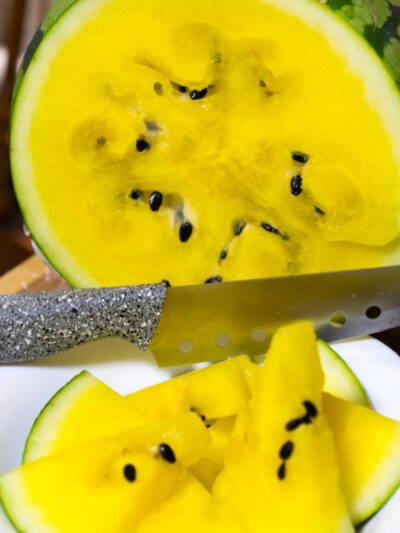 When asked to picture a watermelon, most people have a pretty clear image in their heads: green rind, red flesh. There might be more seeds in some than in others, but the color scheme is usually the same. Except that it doesn’t need to be! There are actually several yellow watermelon varieties on the market.

What is a Yellow Baby watermelon? This variety of watermelon has thin skin and bright yellow flesh. It was developed in the middle of the 20th century by the Taiwanese horticulturist Chen Wen-yu. Known as the Watermelon King, Chen personally developed 280 varieties of watermelon, not to mention the countless other flowers and vegetables he bred over his long career.

At the time of his death in 2012, he was responsible for one fourth of all the watermelon seeds in the world. He developed the Yellow Baby (marketed in Chinese as ‘Yellow Orchid’) by crossing a female American Midget melon with a male Chinese melon. The resulting fruit arrived in the U.S. in the 1970’s where it was met with some suspicion but ultimately won the hearts of all who tasted it.

How to Grow a Yellow Baby Watermelon

Growing Yellow Baby melons is similar to growing most melons. The vines are very cold sensitive and seeds should be started indoors well ahead of the last frost in climates with short summers.

The vines reach maturity 74 to 84 days after planting. The fruits themselves measure about 9 by 8 inches (23 x 20 cm.) and weigh about 8 to 10 pounds (3.5-4.5 kg.). The flesh is, of course, yellow, very sweet, and crisp. According to many gardeners, it is even sweeter than the average red watermelon.

Yellow Baby has a relatively short shelf life (4-6 days) and should be eaten right away after it’s picked, although I don’t think this would really be an issue considering how good it tastes.