How To Grow Buckwheat: Learn About Buckwheat Uses In Gardens 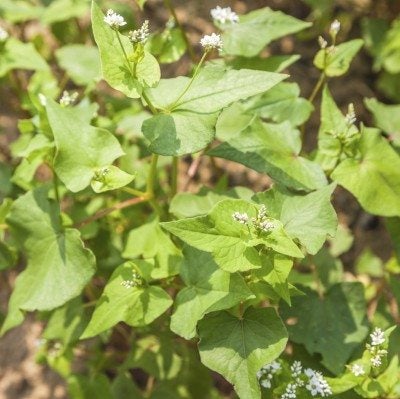 Until fairly recently, many of us only knew of buckwheat from its use in buckwheat pancakes. Today’s sophisticated palates now know it for those delicious Asian buckwheat noodles and also realize its superior nutrition as a cereal grain. Buckwheat uses extend to those in gardens where buckwheat can be used as a cover crop. How then, to grow buckwheat in the home garden? Read on to learn more about the growth and care of buckwheat.

Buckwheat is one of the earliest crops cultivated in Asia, most likely in China 5,000 to 6,000 years ago. It spread throughout Asia to Europe and was then brought to the American colonies in the 1600’s. Common on farms in the northeast and north central United States at that time, buckwheat was used as a livestock feed and as a milling flour.

Buckwheat is a broadleaf, herbaceous plant that flowers abundantly over the course of several weeks. The small, white blooms rapidly mature into triangular brown seeds about the size of soybean seeds. It is often referred to as a pseudo-cereal since it is utilized in much the same way cereal grains like oats are, but it is not a true cereal due to seed and plant type. The majority of buckwheat growing in the United States occurs in New York, Pennsylvania, Michigan, Wisconsin, Minnesota, and North Dakota and much of it is exported to Japan.

How to Grow Buckwheat

Buckwheat cultivation is most suited to moist, cool climates. It is sensitive to temperature fluxes and can be killed off by a frost in the spring and fall while high temps affect blooms, and thus, seed formation.

This grain will tolerate a wide range of soil types and it has a higher tolerance to soil acidity than other grain crops. For optimal growth, buckwheat should be sown in medium textured soils like sandy loams, loams, and silt loams. High levels of limestone or heavy, wet soils adversely affect buckwheat.

Buckwheat will germinate at temps ranging from 45 to 105 degrees F. (7-40 C.). Days to emergence are between three to five days depending upon planting depth, temperature, and moisture. Seeds should be set 1 to 2 inches (2.5-5 cm.) in narrow rows so a good canopy will be established. Seeds can be set with a grain drill, or if planting for a cover crop, simply broadcast. The grain will grow rapidly and reach a height of 2 to 4 feet (61 cm. to 1 m.). It has a shallow root system and is intolerant of drought, so care of buckwheat entails keeping it moist.

As mentioned, buckwheat crops are used primarily as a food source but they have other uses as well. This grain has been used as a substitute for other grains when feeding livestock. It is generally mixed with corn, oats, or barley. Buckwheat is sometimes planted as a honey crop. It has a long blooming period, available later in the growing season when other nectar sources are no longer viable.

Buckwheat is sometimes used as a smother crop because it germinates rapidly and the dense canopy shades the ground and smothers most weeds. Buckwheat is found in many commercial bird foods and is planted to provide food and cover for wildlife. The hulls from this grain have no food value, but they are used in soil mulch, poultry litter, and in Japan for stuffing pillows.

Lastly, buckwheat uses in gardens extend to cover crops and green manure crops. Both are much the same. A crop, in this case, buckwheat is planted to prevent soil erosion, aid in water retention, squelch weed growth, and enrich the soil composition. A green manure is tilled under while the plant is still green and begins its decomposition process at that time.

Using buckwheat as a cover crop is an excellent choice. It won’t overwinter, making it easier to work with in the spring. It grows rapidly and creates a canopy that will smother weeds. When plowed under, the decaying matter significantly raises the nitrogen content for successive crops and also improves the moisture holding capacity of the soil.