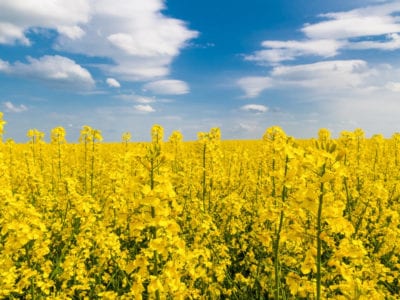 Gardeners plant cover crops to improve the soil by bulking it up with organic matter along with preventing erosion, suppressing weeds, and boosting microorganisms. There are many different cover crops, but we’re going to focus on canola as a cover crop. While commercial farmers are more likely to plant winter cover crops with canola, planting canola cover crops for home gardeners can be quite beneficial. So what is canola and how can canola be used as a cover crop?

You’ve probably heard of canola oil but did you ever stop to think about where it comes from? Canola oil does indeed come from a plant, which contains about 44% oil. Canola is derived from rapeseed. In the 60’s, Canadian scientists bred out the undesirable traits of rapeseed to create canola, a contraction of “Canadian” and “ola.” Today, we know it as the oil with the least saturated fat of all the culinary oils.

Canola plants grow from 3-5 feet (1 to 1.5 m.) in height and produce tiny brownish-black seeds that are crushed to release their oils. Canola also blossoms with a profusion of small, yellow flowers that brighten up the garden at a time when few plants are in bloom.

Canola is in the same family as broccoli, Brussels sprouts, cauliflower, and mustard. It is used all over the world but primarily grown in Canada and Australia. Here in the United States, canola is commonly grown outside of the Midwest.

On commercial farms, winter cover crops of canola seeded in early September produce the most growth and ground cover and amass the most nitrogen in the aboveground biomass and may be combined with other cover crops such as lentils. Canola, a broadleaf plant, does a better job than wheat in protecting the soil from erosion since the leaves die off during the winter but the crown stays alive in a dormant state.

As with most other crops, canola does best in well-drained, fertile, silt loam soil. Canola can be planted either in a tilled garden or no-till. A finely prepared, tilled seedbed allows for a more uniform seeding depth than a no-till bed and can also help incorporate fertilizer into the roots of the plant. That said, if you are planting canola cover crops when there has been little rainfall and the soil is dry, no-till may be the better way to go, as this will help retain seed moisture.