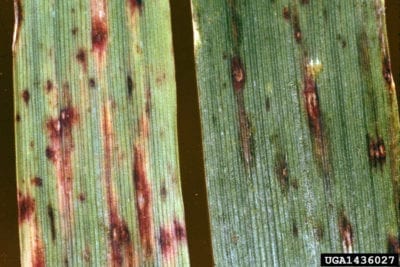 Crop losses of as much as 15 percent have been reported during certain seasons in the highest oat producing regions from leaf blotch of oats. It is caused by any one of three different fungal pathogens – Pyrenophora avenae, Drechslera avenacea, Septoria avenae. While this isn’t a huge number, in commercial settings and in smaller fields the impact is significant. However, oat leaf blotch control is possible through several means.

Fungi are probably one of the most common disease causes in cereal grains, such as oat crops. Oat leaf blotch occurs in periods of cool, moist conditions. Oats with leaf blotch develop later phases of the disease, which can damage the culm to the extent that it cannot develop seed heads. It causes symptoms that start as leaf blotch and move to black stem and kernel blight phases.

In the first phase, symptoms of oat leaf blotch only affect the leaves, which develop irregular, light yellow lesions. As these mature, they become reddish brown and decayed tissue falls out, while the leaf dies. The infection spreads to the stems and, once it infects the culm, the head that forms may be sterile.

In the final phase, dark blotches appear on the flower head. In severe cases, the disease will cause the plant to produce malformed kernels or no kernels at all. Not all leaf blotch of oats progress to the kernel blight phase. It depends upon the time of year, prolonged weather conditions that favor the fungus and cultural conditions.

Oat leaf blotch info suggest that the fungus overwinters in old plant material and occasionally from seed. After a hard rain, fungal bodies form and are dispersed with wind or further rain. The disease can also spread through contaminated manure where oat straw was consumed by the animal. Even insects, machinery, and boots spread the disease.

Since it is most common in areas with oat stubble, it is important to completely till this into soil deeply. The area should not be replanted with oats until the old plant material has rotted. Oats with leaf blotch can be sprayed with fungicides early in the season, but if caught when disease symptoms have spread to other parts of the plant, these are not effective.

Besides fungicides or tilling in old material, crop rotation every 3 to 4 years has the greatest efficacy. There are some resistant oat varieties that are useful for disease control in prone areas. Seed can also be treated with EPA approved fungicides prior to planting. Avoiding continuous cropping also seems to be helpful.

Old plant material can also be safely destroyed by burning where this is reasonable and safe. As with most diseases, good sanitation practices and cultural care can prevent impact from this fungus.

Printer Friendly Version
Read more about Oats
<PreviousNext>
Did you find this helpful? Share it with your friends!
FacebookTweetPinEmail
Related Articles
Newest Articles
You might also like…
Additional Help & Information