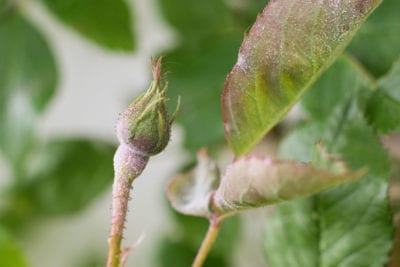 Those of us who grow and care for roses often encounter a soft whitish coating on our plants’ leaves, stems and sometimes buds. This substance is powdery mildew, known to experts as  Sphaerotheca pannosa var. rosae. The powdery mildew fungus shows up more often than we’d like, especially in humid climates or damp environments.

If you think you’re seeing powdery mildew on your roses, take a few minutes to learn why it’s there and what can be done about it.

Powdery mildew looks a lot like it sounds – like a fine, soft powder sprinkled on your plant. It’s important to periodically inspect your rose bushes on both sides of the leaves, as well as the stems. This common fungus can spread from the leaves to the stems, and even to the buds themselves. Even worse, it can and will spread to other nearby plants.

Moisture is a friendly environment for rose powdery mildew. It helps the fungus travel from one part of the plant to the next. The powdery mildew fungus can be fairly destructive. Fresh new foliage on a rose bush is its favorite snack, and its presence can cause the bush’s leaves to become deformed.

Left untreated, rose powdery mildew will attack the rose buds, stunting and disfiguring them, and preventing them from opening. Warm, dry days followed by cool, humid nights are the perfect conditions for an outbreak of powdery mildew.

Be sure you trim away what you can of the powdery leaves and discard them. Make sure all dead leaves, stems and decaying matter are removed from the bush and around its base. Rose bushes need some air to pass through them, so if they’ve grown bushy and bunchy, you should do a bit of pruning.

If you’re seeing just a light case of powdery mildew, you can try spraying it off with water on a warm, dry day. However, it’s good to keep an eye on it, because it’s more than likely to return.

Perhaps the best way to stop the fungus in its tracks is to treat your roses with neem oil. Other organic products on the market that contain potassium bicarbonate are fairly effective as well. There are homemade remedy recipes available on the Internet, such as mixtures of dish soap, cooking oil and baking soda, but they can be harsh and present a fair amount of risk to the plant. Neem oil is probably the safest solution.

Always water your roses at ground level. Water from sprinklers will sit in and on the leaves and buds, which encourages powdery mildew. Also, remember when you’re planting your roses that they like sunshine. Try not to plant them in a crowded or shady environment.

There are some varieties of roses that seem to attract powdery mildew. When you shop for roses, try to choose the types that are more disease resistant. Having this designation doesn’t mean your rose bush will never contract powdery mildew, but it will be less likely.

If you’re shopping from a catalog or a local garden nursery, ask an expert and look for notations about the plant’s resistance to disease.