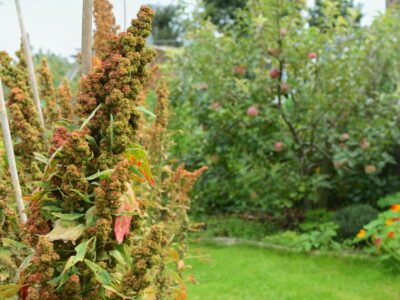 Quinoa is an ancient grain with more essential nutrients than wheat or other cereal crops. Yet, growing this South American native plant can be difficult. In honor of National Quinoa day on January 16, let’s celebrate by taking a look at common problems with quinoa crops.

One of the biggest issues facing commercial growers and home gardeners is meeting quinoa’s climate requirements. Originating in mountainous areas, quinoa requires cool temperatures and short daylight hours to reach its full potential. This can make it difficult to grow and harvest quinoa in many agricultural areas.

Research shows that temperatures above 95 degrees F. (35 C.) cause quinoa plants to go dormant or the pollen to become sterile. Due to this temperature sensitivity, experts suggest experimenting with small plots before devoting larger areas to this crop.

On the plus side, quinoa can be grown in a variety of soil conditions. It tolerates poor drainage, low soil fertility, salinity and a wide range of pH from 4.8 to 8.5. Quinoa can withstand frost and temperatures down to 28 degrees F. (-2.2 C.).

Due to its slow growth rate after emergence, weeds are another cultivation issue. Studies indicate a higher percentage of weeds were visible in fields utilizing no-till preparation methods as compared to tilled fields. Hand pulling is recommended for home gardeners, but commercial growers are advised to contact their local extension office for the latest information on herbicide use for quinoa.

Quinoa is related to spinach, chard and beets, thus many of the invertebrate pests that infect these crops will also reduce yields and plant vitality of quinoa. Researchers have found a number of harmful bugs in quinoa test crops, including several species of flea beetles, aphids and cutworms.

Currently, there aren’t any pesticides cleared for use on quinoa. Home gardeners reported success using insecticidal soaps. Predatory insects can provide control measures for some types of quinoa pests. Commercial growers and home gardeners are advised to monitor their crops for these specific pests:

In the Northern regions of the US, generally 2 to 3 generations of beet armyworm larval emerge during the growing season. These caterpillars can destroy seedlings by consuming leaves and petioles.

Quinoa is a secondary plant host to the Bertha armyworm caterpillar. Early larvae stages are vulnerable to weather. These pests can be mistaken for Diamondback moth larvae.

Producing two generations per year, the Goosefoot groundling moth caterpillars feed upon foliage and panicles. Uncontrolled, this pest can annihilate this crop.

Little is known about this invasive species. The quinoa plant bug has reduced yields in test crops.

As the name suggests, the larvae of the stem-boring fly burrows into the stem where it feeds. They can severely reduce yields and cause plant death.

Multiple generations of these quinoa bugs are produced each season. The Tarnished plant bug feeds on the reproductive organs of the quinoa and reduces harvest yields.

While pests are quite prevalent on quinoa crops, the primary disease pressures affecting this crop are downy mildew and leaf spot:

Quinoa affected with this fungus will have dark, oval-shaped lesions with reddish-brown margins appearing on the leaves. Passalora leaf spot spores can be spread by the wind and overwinter on plant debris. Weeds, such as lambsquarter, also host this fungus. Avoiding overhead irrigation helps control this disease.

Cool, damp weather encourages the growth and spread of downy mildew. This fungal infection can be identified by the grayish-powdery appearance on leaf surfaces. Yellowish-pink areas can also appear on the upper side of foliage. As this is one of the most frequent quinoa farming problems seen in test fields, it’s advisable to plant seed which is free of downy mildew.