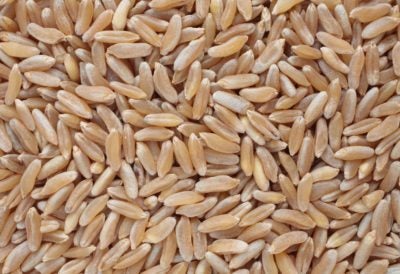 Ancient grains have become a modern trend and with good reason. These unprocessed whole grains have a slew of healthful benefits, from reducing the risk for type II diabetes and stroke to helping to maintain healthy weight and blood pressure. One such grain is called khorasan wheat (Triticum turgidum). What is khorasan wheat and where does khorasan wheat grow?

What is Khorasan Wheat?

Sure you’ve probably heard of quinoa and maybe even farro, but how about Kamut? Kamut, the ancient Egyptian word for ‘wheat,’ is the registered trademark used in marketing products made with khorasan wheat. An ancient relative of durum wheat (Triticum durum), khorasan wheat nutrition contains 20-40% more protein than ordinary wheat grains. Khorasan wheat nutrition also is significantly higher in lipids, amino acids, vitamins, and minerals. It has a rich, buttery flavor and a natural sweetness.

Where Does Khorasan Wheat Grow?

No one knows the exact origin of khorasan wheat. It most likely originates from the Fertile Crescent, the crescent-shaped area from the Persian Gulf through modern southern Iraq, Syria, Lebanon, Jordan, Israel, and northern Egypt. It is also said to date back to the ancient Egyptians or to have originated in Anatolia. Legend has it that Noah brought the grain on his ark, so to some folks it is known as “prophet’s wheat.”

The Near East, Central Asia, and Northern Africa were undoubtedly growing khorasan wheat on a small scale, but it has not been commercially produced in modern times. It did reach the United States in 1949, but interest was lackluster so it was never commercially grown.

Still, other khorasan wheat information, whether fact or fiction I can’t say, says that the ancient grain was brought to the United States by a WWII airman. He claims to have found and taken a handful of the grain from a tomb near Dashare, Egypt. He gave 36 kernels of the wheat to a friend who subsequently mailed them to his father, a Montana wheat farmer. The father planted the grains, harvested them, and displayed them as a novelty at the local fair where they were christened “King Tut’s Wheat.”

Apparently, the novelty wore off until 1977 when the last jar was obtained by T. Mack Quinn. He and his agricultural scientist and biochemist son researched the grain. They found that this type of grain had indeed originated in the Fertile Crescent area. They decided to begin growing khorasan wheat and coined the trade name “Kamut,” and now we are the beneficiaries of this delightful, crunchy, highly nutrient-rich, ancient grain.

Printer Friendly Version
Read more about Wheat
<PreviousNext>
Did you find this helpful? Share it with your friends!
FacebookTweetPinEmail
Related Articles
Newest Articles
You might also like…
Additional Help & Information