What Is Wheat Rust: Learn About Rust Diseases Of Wheat 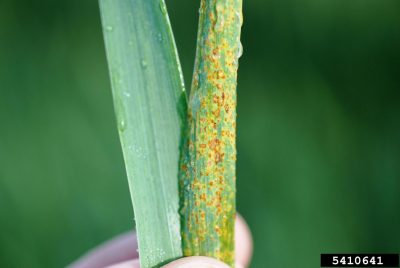 Wheat rust is one of the earliest known plant diseases and it still remains a problem today. Scientific studies offer information that allow us to manage the disease better so that we no longer have worldwide crop losses, but we still have regional crop failures. Use the wheat rust information in this article to help manage your crop.

What is Wheat Rust?

Rust diseases of wheat are caused by a fungus in the genus Puccinia. It can attack any above-ground part of the wheat plant. Small, round, yellow spots form first and later pustules containing the spores appear on the plant. When the pustules release the spores it looks like orange dust and it can come off on your hands and clothes.

Wheat rust endures through time because the disease spores are truly remarkable. When the wheat is wet and temperatures are between 65 and 85 degrees F. (18-29 C.), Puccinia spores can successfully infect a plant in less than eight hours. The disease advances to the stage where it spreads to other plants in less than a week. The fungus produces fine, dust-like spores that are so light they can spread over long distances on the wind and they can modify themselves when they encounter resistant varieties.

Treating rust in wheat plants involves the use of expensive fungicides that often aren’t available to small-scale growers. Instead of treatment, control focuses on prevention of wheat rust diseases. This begins with tilling under the remains of the previous year’s crop and making sure that no volunteer plants remain in the field. This helps eliminate the “green bridge,” or carryover from one season to the next. Completely removing traces of a previous crop also helps prevent other wheat crop diseases.

Resistant varieties are your main defense against wheat rust. Since the spores are adept at modifying themselves when they meet resistance, contact your Cooperative Extension agent for advice about which varieties to grow.

Rotating crops is another important part of rust prevention. Wait at least three years before planting again in the same area.