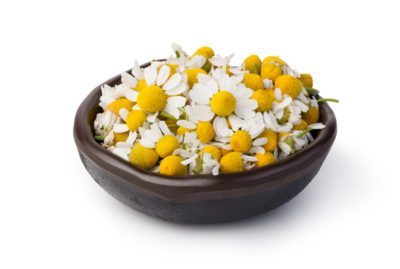 When to Pick Chamomile

Chamomile is a relative of the daisy and a member of the family Asteraceae; you only need to look upon the merry little yellow and white flowers to see the resemblance. There are two basic types of chamomiles, Roman and German chamomile.

Roman chamomile is a low growing perennial that is tolerant of foot traffic. German chamomile grows a bit taller than Roman, and the flowers are a bit smaller. It is considered to be a wild variety of chamomile and a self-seeding annual. Both types of chamomiles can be used in the same beneficial ways, just their growing habits are different.

So, when do you harvest chamomile? While most other herbs are harvested for stems, leaves, or even roots, chamomile harvesting is all about the blossoms. In fact, it is best harvested when the blossoms are open to their fullest, before the petals begin to droop backwards.

Harvest on a dry day, in the morning just after any dew has dried when the essential oils of the plant are at their peak.

How to Harvest Chamomile

Picking chamomile is an easy, relaxing enterprise. Gently pinch the stem of the plant just below the flower head. Then place your forefinger and middle finger under the head of the flower, between the flower head and the other pinched fingers, and pop the flower head off.

Remove all of the flower heads that are in full bloom and leave behind any that are just budding.

Lay the flowers out in a single layer on paper towels or cheese cloth and allow them to dry for one to two weeks in a dark, warm, dry area. You can also dry them in the dehydrator at the lowest possible setting.

When the flowers are dry and cool, store them in a sealed glass jar for up to six months. They can still be used after six months, but the flavor is less intense.