Tips For How To Grow Chamomile 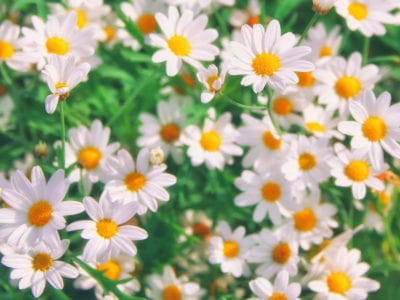 Many people swear by homegrown chamomile tea to calm their nerves. This cheery herb can add beauty to a garden and may have sedative qualities. Chamomile growing in the garden is both useful and visually pleasing.

Roman chamomile is also known as Russian chamomile and English chamomile. It is a creeping ground cover that grows like a mat. It has small daisy like flowers with yellow centers and white petals. The leaves are feathery. It is a perennial.

How to Grow Chamomile Herb

As stated, both kinds of chamomile grow in similar conditions so, from here on, we will refer to them as just chamomile.

You can grow chamomile in USDA plant hardiness zones 3 to 9.

Plant chamomile in the spring from either seeds or plants. It’s easier to establish chamomile herb in your garden from plants or divisions than from seeds, but growing chamomile from seed is also relatively easy.

Chamomile grows best in cool conditions and should be planted in part shade, but will also grow full sun. The soil should be dry.

Once your chamomile is established, it needs very little care. Like most herbs, chamomile grows best when it is not fussed over. Too much fertilizer will result in lots of weakly flavored foliage and fewer flowers.

Chamomile is drought tolerant and only needs to be watered in times of prolonged drought.

For the most part, chamomile is not affected by many pests. It is often recommended as a companion plant to plant in the vegetable garden as its strong scent often keeps pests away. That being said, a chamomile plant weakened by lack of water or other issues may be attacked by aphids, mealybugs or thrips.

Printer Friendly Version
Read more about Chamomile
Next>
Did you find this helpful? Share it with your friends!
FacebookTweetPinEmail
Related Articles
Newest Articles
You might also like…
Additional Help & Information