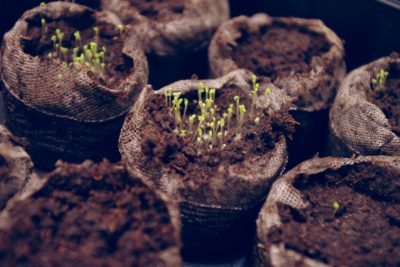 Chamomiles are cheery little plants. Sweetly scented like fresh apples, chamomile plants are used as ornamental flowerbed borders, planted in cottage and herb gardens, or grown as a pollinator friendly, low-maintenance lawn substitute. They are also used as a defense against pests and disease in the vegetable garden. Chamomile plants may range in height from 6 to 18 inches (15-46 cm.) with an equal spread, depending upon the type. All chamomile types produce an abundance of seed that will quickly self-sow wherever it lands in warm, loose soil. Continue reading to learn more about growing chamomile from seed.

How to Grow Chamomile from Seed

There are two different species of plants commonly known as chamomile.

Both types of chamomile plants produce small, white, composite flowers with bright yellow center discs. German chamomile produces a hollow conical disc from which its white petals arch down from. English chamomile’s disc is flatter and solid, the flower petals spread outward from the disc, like a ray.

Upon each disc, or seed head, an abundance of chamomile seeds are produced, which germinate within seven to ten days when exposed to adequate soil, sunlight, and water. When seeds are left on the plant to mature and spread naturally, one chamomile plant can quickly turn into a lovely patch of chamomile.

Chamomile usually produces flowers that can be harvested for herbal use in just six to eight weeks. When harvesting chamomile flowers, most herb gardeners will leave some seed heads to naturally self-sow to produce a small colony of chamomile. You can also set aside some of the harvested blooms to dry for seed to plant in other areas. So, when to plant chamomile seeds in the garden?

Chamomile seeds can be started indoors three to four weeks before the last frost. When planting chamomile seeds indoors, fill a seed tray with a well-draining potting mix, then simply scatter the seeds over the loose soil and lightly tamp it down or water it in with a light mist.

Seedlings should be thinned 2 to 4 inches (5-10 cm.) apart when they are about an inch (2.5 cm.) tall. Plants do not like to be transplanted once their roots have been established and they begin to produce blooms, so many gardeners prefer to sow the seeds directly in the garden.

In the garden or as a lawn substitute, chamomile seeds need only be scattered over loose soil and gently tamped down. Germination can occur in temperatures as low as 45 to 55 degrees F. (7-13 C.) in full sun to part shade.