What Is Asian Ginseng – Learn How To Grow Korean Ginseng Plants 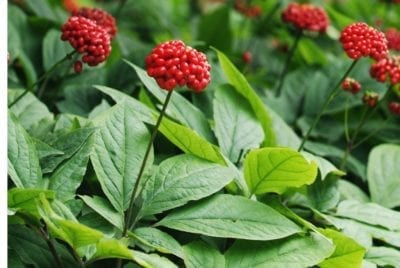 What is Asian Ginseng?

Ginseng has been used in Traditional Chinese Medicine (TCM) for thousands of years, and commercial cultivation of the precious root is a huge and lucrative industry. Ginseng is a perennial plant comprised of eleven or so species that grow in the cold regions of the Northern Hemisphere. Each species is defined by its native habitat. For instance, Asian ginseng root is found Korea, Japan, and northern China while American ginseng is found in North America.

Asian, or Korean ginseng root (Panax ginseng) is the original sought after ginseng that has been used for centuries to treat a plethora of ailments and to maintain overall good health. The root became overharvested and more difficult to procure, so buyers looked towards American ginseng.

American ginseng was so lucrative in the 1700’s that it, too, was overharvested and soon became endangered. Today, wild ginseng that is harvested in the United States is under strict protective rules outlined by the Convention on International Trade in Endangered Species. These rules do not apply to cultivated ginseng, however, so growing your own Korean ginseng is possible.

TCM categorizes American ginseng as “hot” and Ginseng panax as “cold,” each with different medicinal uses and health benefits.

How to Grow Korean Ginseng

Panax ginseng is a slow growing plant that is harvested for its gnarled “man shaped” roots and sometimes its leaves. Roots must mature for six years or so before they can be harvested. It grows wild in the understory of forests. Similar conditions must be replicated when growing Korean ginseng on your own property.

Once you have acquired seeds, soak them in a disinfecting solution of 4 parts water to 1 part bleach. Discard any floaters and rinse the viable seeds with water. Place the ginseng seeds in a bag of fungicide, enough to shake around and coat the seeds with fungicide.

Prepare a site for the ginseng to grow. It prefers loamy, clay, or sandy soil with a pH of 5.5 to 6.0. Ginseng thrives in the understory of trees like walnut and poplar as well as cohosh, fern, and solomon’s seal, so if you have any of these plants, all the better.

Keep the seeds just damp until the ginseng germinates, which can take up to 18 months. Add another layer of rotted leaves every few months which will provide the plants with nutrients as they break down.

Your ginseng will be ready to harvest in five to seven years. When harvesting, do so gently so you don’t damage the valuable roots. Lay the harvested roots out on a screened tray and dry them at temps between 70 to 90 degrees F. (21-32 C.) with a humidity of between 30 and 40%. The roots will be dry when they can be easily snapped in two, which will take several weeks.