Solomon's Seal
By: Becca Badgett, Co-author of How to Grow an EMERGENCY Garden
Printer Friendly Version 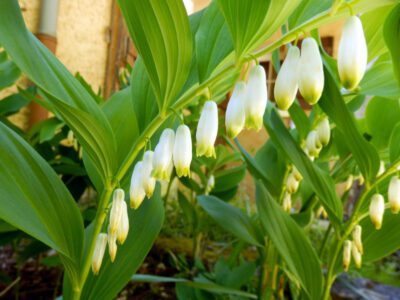 Solomon’s seal info indicates that scars on the plants where leaves have dropped look like the sixth seal of King Solomon, hence the name.

How to Plant a Solomon’s Seal

You may find some Solomon’s seal growing in wooded areas of USDA Hardiness Zones 3 through 7, but don’t disturb the wild plants. Purchase healthy plants from a local nursery or garden center, or get a division from a friend to add this interesting beauty to the woodland garden.

Learning how to plant Solomon’s seal simply requires burying a few of the rhizomes in a shaded area. Solomon’s seal info advises leaving plenty of room for them to spread when initially planting.

These plants prefer moist, well draining soil that is rich, but are drought tolerant and can take some sun without wilting.

Caring for a Solomon’s seal requires watering until the plant is established.

Caring for a Solomon’s seal is relatively easy. Keep the soil consistently moist.

There are no serious insect or disease issues with this plant. You’ll find them multiplying by rhizomes in the garden. Divide as needed and move them to other shady areas as they outgrow their space or share with friends.