Cooking With Lavender From The Garden 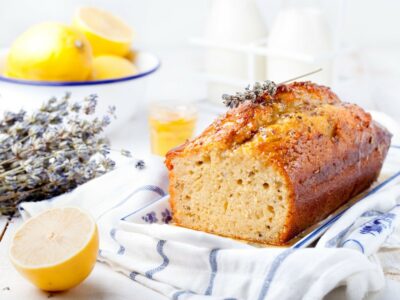 Lavender is often found in soaps, perfumes, aerosol sprays, lotions, potpourris and even candles. Most people love the scent but can’t imagine it in food.

The type of lavender used in cosmetics is French lavender while the type for culinary use is called English lavender. While all lavender is safe to eat, English lavender (Lavandula angustifolia) or “true” lavender contains much less essential oil than its aromatic cousin used in perfumes and soaps. If you want to try cooking with lavender use English lavender, otherwise your food may taste bitter or soapy.

That said, less is still more. Culinary lavender has a more delicate flavor than French, but it can still be quite an overpowering flavor if used in profusion. Dried lavender is three times as potent as fresh.

Lavender in baked goods should be used sparingly, but in the right proportion is delicious. It can be ground and used in baking cookies and cakes or bury the buds in sugar and allow the essential oil to soak into the sugar crystals for a week.

Lavender can also be used to kick up your homemade pizza dough. Just add 1-2 teaspoons (4.9 -9.8 ml.) of the herb to your favorite dough recipe. For toppings, stick to vegetables and creamy mozzarella.

Lavender honey is another option for use in baked goods, or just drizzled into a hot cup of tea.

Lavender is an anti-microbial, which means it should never be used in yeast bread recipes.

Lavender isn’t just delicious in baked goods. It pairs extremely well with rich, fatty ingredients which cut the strong flavor of the herb. Lavender is one component of the French herbes de Provence commonly sprinkled on meat and fatty fish like salmon and tuna.

A great way to use either lavender alone or in herbes de Provence is to make a brown butter wherein the herb is fried into melted butter. The resulting flavored butter can be spooned over steak or tossed with roasted vegetables.

Lavender can even be used in risotto; lavender-lemon salmon risotto for instance. Try a touch of lavender in lemon pilaf.

Add lavender to whipping cream, milk or custard to make a unique and delicious whipped cream or ice cream.

Lastly, don’t overlook lavender’s use in beverages. Simple syrup can be made by melting equal parts sugar and water in a saucepan with either fresh or dried lavender to taste. Cool and you are ready to be the cocktail master or to create non-alcoholic beverages like pink lavender lemonade with strawberries or lemon, ginger and lavender iced tea.

Printer Friendly Version
Read more about Lavender
<Previous
Did you find this helpful? Share it with your friends!
FacebookTweetPinEmail
Related Articles
Newest Articles
You might also like…
Additional Help & Information