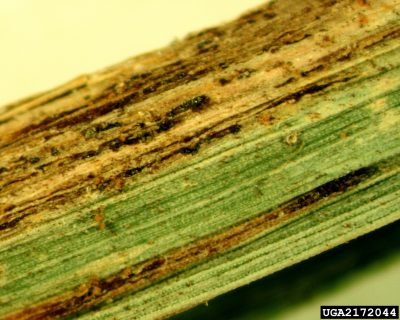 Help, My Lemongrass Leaves are Brown!

Like me, you’re probably asking “Why is my lemongrass turning brown?”

The most obvious reason for a lemongrass plant turning brown would be lack of water and/or nutrients. Lemongrass is native to areas with regular rainfall and high humidity so they may need more water in the home garden than other plants.

Water and mist the plants regularly. To keep other plants nearby from getting drowned out by the frequent watering, plant the lemongrass in a bottomless container buried in the soil.

Lemongrass also needs lots of nitrogen, so fertilize the plants with a balanced soluble fertilizer once a month.

In the case of rust infection, lemongrass leaves are not only brown, but there will be light yellow spots on the foliage with streaks of brown and dark brown pustules on the undersides of leaves. Severe infection may result in the death of leaves and eventually plants.

Rust spores survive on lemongrass debris on the ground and is then spread by wind, rain, and water splashing. It is most common in areas of high rainfall, high humidity, and warm temperatures. So, despite the fact that lemongrass thrives in such areas, obviously there can be too much of a good thing.

To manage rust, promote healthy plants by using mulch and fertilize regularly, prune out any diseased leaves, and avoid overhead irrigation. Also, don’t space the lemongrass too close together, which will only encourage transmission of the disease.

Brown leaves on lemongrass may also mean leaf blight. Leaf blight’s symptoms are reddish brown spots on leaf tips and margins. The leaves actually look like they are desiccating. In the case of leaf blight, fungicides may be applied and also prune out any infected leaves.

Printer Friendly Version
Read more about Lemongrass
<PreviousNext>
Did you find this helpful? Share it with your friends!
FacebookTweetPinEmail
Related Articles
Newest Articles
You might also like…
Additional Help & Information