Azalea Is Not Leafing Out: Why Are There No Leaves On My Azalea 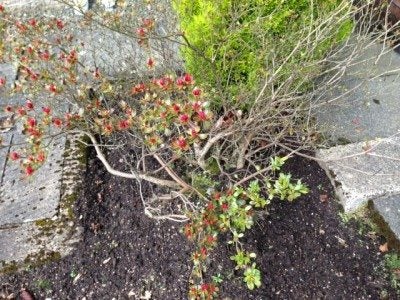 Image by Gardening Know How, via Gillian Carpenter

Azalea bushes without leaves can cause anxiety as you wonder what to do. You’ll learn to determine the cause of leafless azaleas and how to help the shrubs recover in this article.

No Leaves on My Azaleas

Before deciding that there is something wrong with your azalea, give the leaf buds plenty of time to open. Deciduous azaleas – those that lose their leaves in the fall and regrow them in spring – usually have blooming flowers before they have leaves. Wait a while before you worry that this azalea is not leafing out.

Some azaleas are evergreen in warm climates and deciduous in cold climates. Most azaleas that appear to be evergreen actually have two sets of leaves. The first set leafs out in spring and drops off in the fall. You don’t notice the drop because another set of leaves appears in late summer and drops off in spring. During unusually harsh or long winters, azaleas that have held their leaves year round in the past may behave like deciduous azaleas.

My Azalea Shrubs Do Not Have Leaves

Scrape off a little of the bark and check the color of the wood. Green wood means the branch is healthy and brown wood indicates that it is dead. Dead wood should be trimmed off. Cut the twigs and branches back to a point just beyond a side branch to encourage healthy regrowth.

If your azalea won’t grow leaves, you should also consider the possibility of diseases. Leaf rust is a fungal disease that causes yellow flecking on top of the leaves and rust-colored pustules on the undersides. When the disease is severe enough, the leaves fall off. It’s best to pick off all of the leaves as soon as the symptoms appear to prevent the spread of the disease.

Phytophthora root rot is a disease that lives in the soil, preventing azalea leaf growth and causing older leaves to drop off. There is no cure and the shrub eventually dies. You can confirm the diagnosis by checking the roots. They turn reddish-brown and die off when infected. You may only find roots in the top few inches (7-8 cm.) of soil.