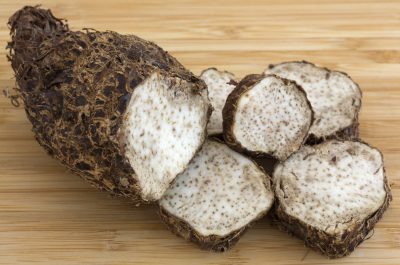 If you are lucky enough to live in a neighborhood populated by Caribbean or South American grocers, have lived or visited those areas, or are yourself from the tropics or South America, then you may be familiar with malanga root uses. Everyone else is probably asking “what is a malanga root?”. Read on to find out more malanga plant info and about growing malanga roots in the garden.

Malanga is very similar to taro and eddo, and can be easily confused with them. In fact, in some areas malanga root is called eddo, as well as yautia, cocoyam, coco, tannia, sato-imo, and Japanese potato. The plant is grown for its tubers, belembe or calalous, which are used in a variety of dishes.

What is a Malanga Root?

In North America, malanga is more commonly referred to as “elephant ear” and is generally grown as an ornamental. At the base of the plant is the corm or tuber around which radiate smaller corms.

The plant’s foliage can grow up to 5 feet (1.5 m.) long with huge leaves that look much akin to elephant ears. The young leaves are edible and used like spinach. The corm or tuber is earthy brown, looks kind of like a big yam, and can range from anywhere between ½ to 2 pounds (0.25-1 kg.) in size. The exterior hides the crisp interior yellow to reddish flesh.

In South America and other tropical regions, malanga tubers are commonly cultivated for use in the cuisines of those regions. The flavor is like a starchy nut. The tuber is high in calories and fiber along with riboflavin and folate. It also contains a modicum of iron and vitamin C.

It is often ground into flour but is also stewed, grilled, and sliced then fried. For people with food allergies, malanga flour is an excellent substitute for wheat flour. This is because the starch grains contained in malanga are smaller, thus more easily digestible which reduces the risk of allergic reaction. As mentioned, the young leaves are also edible and are often used in stews and other dishes.

In Cuba and Puerto Rico, malanga features prominently in such dishes as alcapurrias, mondongo, pastels, and sancocho; while in the Caribbean the young leaves are integral to the famous callaloo.

Basically, malanga root can be used anywhere you would use a potato, yam, or another root veggie. As with most other species of Araceae, malanga root contains calcium oxalate and saponin, whose bitter taste and toxic effects are canceled out during cooking.

When the root is cooked it softens and is ideal for use as a thickener and to make creamy dishes. The root is also often cooked down and mashed as potatoes for a creamy side dish. Malanga can be peeled, grated, and then mixed with flour, egg, and herbs to make fritters.

Fresh malanga root can be kept at room temperature for a few weeks and even longer if kept in the refrigerator.

Propagate by planting the entire main tuber or secondary tubers of just a piece of the main tuber. If you are using seed pieces, cure them first by dipping them into a fungicide and then allowing them to air dry for two hours.