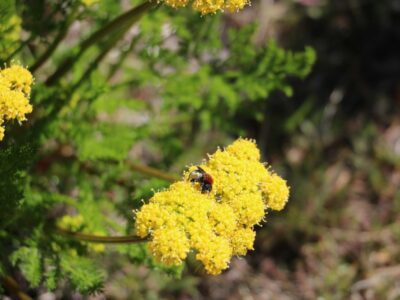 Biscuitroot or Lomatium root is a member of the Umbelliferae (carrot or parsley) family and is found across much of western North America. Depending upon the source there are anywhere from 80 to 120 species primarily endemic to regions of the western U.S. Also known as desert parsley, Lomatium root has long been used as a food source by native people as well as for its medical benefits.

Lomatium root is a perennial that appears in the spring. Low growing, 2 to 12 inches (5-31 cm.), most species grow in arid regions during the early spring, seed, and then die back during the heat of the summer. The root survives underground.

Most species of Lomatium root bear flowers borne in compound umbels and are usually white or yellow although rarely they may be purple to maroon. The seed pods of biscuitroot are generally papery or corky and winged to help with wind dispersal.

The leaves of biscuitroot plant are basal and dissected often looking much akin to ferns.

The part of the plant that is used as a food source is the root which varies from short, stubby, and radish-like to long and slender. Rounder roots are 2 to 4 inches (5-10 cm.) long while thin roots may be 4 to 12 inches (10-31 cm.) in length. In all cases, the root is covered with a thin black skin which should be peeled prior to using.

The interior of biscuitroot is white and fibrous and can be eaten fresh like a carrot or boiled, roasted, or dried and then ground into flour to make a cake or biscuit.

Other common species include Gray’s and Nineleaf biscuit root. The genus is difficult to identify (which accounts for the varied quoted number of species) and some habitats are under threat from grazing development and wildfire. L. dissectum in particular is of some concern as its habitat is being wiped out due to wild harvesting of the plant for herbal use.

Printer Friendly Version
Read more about Parsley
<Previous
Did you find this helpful? Share it with your friends!
FacebookTweetPinEmail
Related Articles
Newest Articles
You might also like…
Additional Help & Information