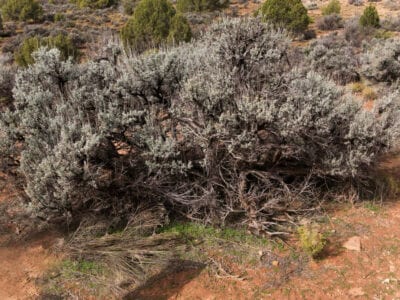 Sagebrush (Artemisia tridentata) is a common sight along roadsides and in open fields in parts of the Northern Hemisphere. The plant is characteristic with its grayish green, needle-like leaves and spicy, yet acrid, smell. During the heat of the day, the scent is a recognizable fragrance in desert and scrublands. Growing sagebrush plants in the home landscape provides a natural look for the open field or pasture.

While familiar to most people, there are wonderful attributes to this plant. What is sagebrush and what are uses for sagebrush? This amazingly adaptive plant is tough enough to thrive in inhospitable terrain.

It has fine hairs on the leaves that help prevent moisture loss and produces a deep taproot that dredges moisture from nearly subterranean deposits of moisture under the earth. This plant is a member of the family Artemisia, or wormwood, of which there are varieties across the globe.

Artemisia is a genus of plants with pronounced medicinal abilities. Sagebrush plants are no exception and teas were made from the bush and used for the healthful properties.

Sagebrush leaves can be identified by their grayish wooly appearance. They are about an inch long and end in a three-pronged set of “teeth.” This characteristic is important sagebrush plant information and sets them apart from other species of Artemisia.

The young bark is gray and covered in fine hairs while older growth is dressed in shredded bark that falls off easily. Most plants do not grow taller than 4 feet (1 m.) but occasionally they have been found 10 feet (3  m.) tall in their native habitat. The shorter size is more likely when growing sagebrush plants in the home landscape.

In addition to the medicinal uses for sagebrush, it is an important habitat for native birds, small rodents and reptiles. The plant was used as building material for baskets and rope, and the wood was fuel for early Native American people.

It also has importance as a spiritual and ritual aromatic plant. The smoke is thought to have cleansing properties by those with belief in spirits.

As a poultice, it clears lungs and eases aches and pains. It was once chewed for its ability to soothe stomach problems and bowel issues. Another of the uses for sagebrush included lining cloth with the leaves of the plant as a diaper.

How to Care for a Sagebrush Plant

Sagebrush is a member of a hardy and adaptive genus that thrives where moisture and nutrients are low. They can survive ferocious winds and extreme periods of drought. As such, the worst thing you can do to sagebrush is overwater it. If you give the plant supplemental water in spring, it will bloom. There is no need to water after the plant has been established.

Most pests and insects are repelled naturally by the plant’s strong taste and odor.

Plant the bush in well-drained soil with plenty of sand or gritty material mixed into a depth of at least 8 inches (20 cm.). Potted plants should grow in a mixture of half sand and half perlite. This provides the dry conditions even in a container that the plants need.

Pruning to remove dead wood or errant growth should be done in late winter.

Try a sagebrush plant for part of your xeriscape garden, or as an anchoring plant for unused and arid zones of the landscape.