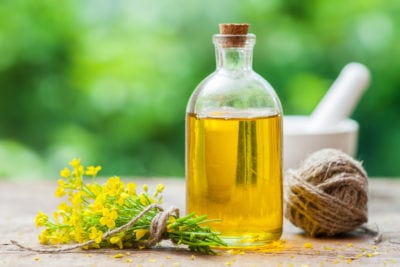 Canola oil is likely a product that you use or ingest on a daily basis, but what exactly is canola oil? Canola oil has many uses and quite a history. Read on for some fascinating canola plant facts and other canola oil information.

What is Canola Oil?

Canola refers to edible oilseed rape, a plant species in the mustard family. Relatives of the rapeseed plant have been cultivated as food for millennia and were used as both food and fuel oil since the 13th century throughout Europe.

Rapeseed oil production peaked in North America during the World War II. It was found that the oil adhered well to moist metal, ideal for use on marine engines crucial to the war effort.

Just like soybeans, canola has not only high oil content but is also high in protein. Once the oil is crushed from the seeds, the resulting meal contains a minimum of 34% protein, which is sold as mash or pellets to be used to feed livestock and to fertilize mushroom farms. Historically, canola plants were used as forage for field-raised poultry and swine.

Both spring and fall types of canola are grown. Flowers begin to form and last from 14-21 days. Three to five blooms open each day and some develop pods. While the petals fall from the blossoms, pods continue to fill out. When 30-40% of the seeds have changed color, the crop is harvested.

How to Use Canola Oil

In 1985, the FDA ruled that canola is safe for human consumption. Because canola oil is low in erucic acid, it can be used as cooking oil, but there are many other canola oil uses as well. As cooking oil, canola contains 6% saturate fat, the lowest of any other vegetable oil. It also contains two polyunsaturated fatty acids that are essential to the human diet.

Canola oil can be found typically in margarine, mayonnaise, and shortening, but it is also used to make suntan oil, hydraulic fluids, and biodiesel. Canola is used in the manufacture of cosmetics, fabrics, and printing ink too.

The protein rich meal that is the residual product left after pressing for oil is used to feed livestock, fish, and people – and as a fertilizer. In the case of human consumption, the meal can be found in bread, cake mixes, and frozen foods.