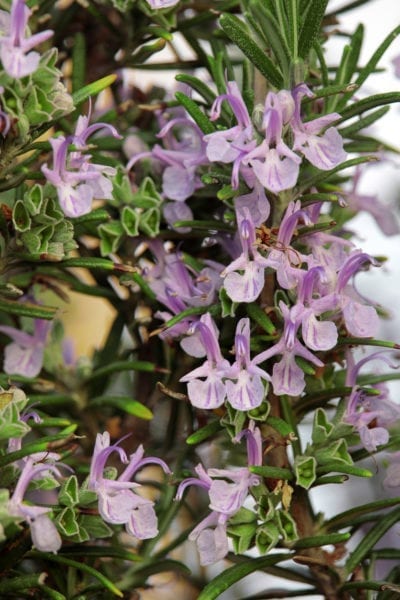 Rosemary(Rosemarinus officinalis) is an aromatic, perennial evergreen shrub that is steeped in history. The ancient Romans and Greeks used rosemary and associated it with love of their deities Eros and Aphrodite. You are likely to love it as well for its delicious flavor, scent and ease of growing.

Rosemary is in the mint family, Labiatae, and is native to the Mediterranean hills, Portugal, and northwestern Spain. While rosemary is primarily used in culinary dishes, in ancient times, the herb was associated with remembrance, memory and fidelity. Roman students wore sprigs of rosemary woven into their hair to improve memory. It was once also woven into a bridal wreath to remind the new couples of their wedding vows. It was even said that just a light touch of rosemary could render one hopelessly in love.

Pink flowering rosemary (Rosmarinus officinalis var. roseus) has a semi-weeping habit with typically small, needle-like, resinous leaves. With no pruning, pink flowering rosemary sprawls attractively or it can be tidily pruned. The pale pink blossoms bloom from spring into summer. It may be found under names such as ‘Majorca Pink,’ ‘Majorca,’ ‘Roseus,’ or ‘Roseus-Cozart.’

Pink flowering rosemary, like all rosemary plants, thrives in full sun and is drought tolerant and hardy down to 15 degrees F. (-9 C.). The shrub will grow to about three feet in height depending upon pruning and is hardy to USDA zones 8-11.

This fragrant ornamental has few pest issues, although the usual culprits (aphids, mealybugs, scales and spider mites) might be attracted to it. Root rot and botrytis are the most common diseases that afflict rosemary, but other than that the plant is susceptible to few diseases. The number one problem resulting in plant decline or even death is overwatering.

Once the plant is established, it requires very little care. Water only when the weather has been extremely dry.

Prune the plant as desired. To harvest for use in food, only take 20% of the growth at any one time and don’t cut into the woody parts of the plant unless you are pruning and shaping it. Cut sprigs in the morning before the plant has flowered for the best flavor. The sprigs can then be dried or the leaves stripped from the woody stem and used fresh.