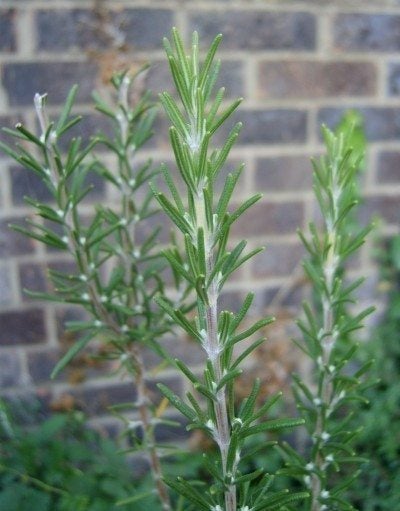 Evergreen rosemary is an attractive evergreen shrub with needle-like leaves and brilliant blue flowers. The flowers of evergreen rosemary persist through spring and summer, filling the air with a nice piney fragrance. This beautiful herb, mostly used for seasoning dishes, is also commonly used as ornamental plantings in the landscape.

The scientific name for rosemary plant is Rosmarinus officinalis, which translates to “mist of the sea,” as its gray-green foliage is thought to resemble mist against the sea cliffs of the Mediterranean, where the plant originates.

Rosemary plant care is easy. When growing rosemary plants, provide them with well-drained, sandy soil and at least six to eight hours of sunlight. These plants thrive in warm, humid environments and cannot take extremely cold temperatures. Since rosemary cannot withstand winters below 30 F. (-1 C.), it’s often better when growing rosemary plants to put them in containers, which can be placed in the ground and easily moved indoors during winter.

Rosemary prefers to remain somewhat on the dry side; therefore, terra cotta pots are a good choice when selecting suitable containers. These pots allow the plant to dry out faster. Thoroughly water rosemary plants when the soil is dry to the touch but allow the plants to dry out between watering intervals. Even indoors, rosemary plants will require lots of light, at least six hours, so place the plant in a suitable location free of drafts.

Pruning rosemary will help make a bushier plant. Most herbs thrive on being trimmed every now and then, especially those used for flavorings. Snip sprigs just as you would when cutting back a houseplant, trimming rosemary once blooming has ceased. The general rule for trimming rosemary is not to take more than one-third of the plant at any time and make cuts just above a leaf joint. These can then be dried like any other herb by hanging tied bundles upside down in a cool, dry place.

Rosemary plants are usually propagated by cuttings, as it can be tricky getting evergreen rosemary seeds to germinate. Successfully growing rosemary plants from seeds comes only when the seeds are very fresh and when planted in optimum growing conditions.

Start new rosemary plants with cuttings from existing evergreen plants. Cut stems that are about 2 inches (5 cm.) long and remove leaves on the bottom two-thirds of the cutting. Place the cuttings in a mixture of perlite and peat moss, spraying with water until roots begin to grow. Once roots have developed, you can plant the cuttings as you would with any rosemary plant.

Rosemary plants are prone to becoming root bound and should be repotted at least once a year. Yellowing of the lower foliage is an early indication that it’s time to repot.

Watch A Video About Growing Rosemary:

Printer Friendly Version
Read more about Rosemary
Next>
Did you find this helpful? Share it with your friends!
FacebookTweetPinEmail
Related Articles
Newest Articles
You might also like…
Additional Help & Information