How To Harvest Rue Plants: Tips On Using Rue Herbs In The Garden 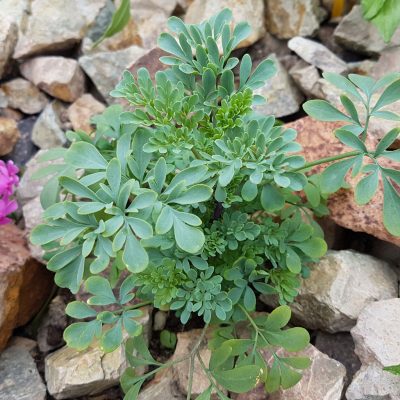 The word “rue” denotes regret, but the rue I want to talk about has nothing to do with regret. Rue is an evergreen shrub in the family Rutaceae. Indigenous to Europe, people have been harvesting rue herbs for centuries to treat a myriad of ailments from insect bites to eye strains to warding off the plague. People were also using rue herbs from the garden in marinades and sauces as well as for their use as a green dye. Read on to find out when to use rue and how to harvest rue.

When to Use Rue Herbs

Rue (Ruta graveolens) has acclimatized to the United States and can be grown in USDA zones 4 to 9. A fascinating herb, the shrub bears small yellow flowers that, along with its foliage, emit a strong, some say obnoxious, fragrance. Interesting in that the genus, Ruta, belongs to the family Rutaceae, whose members include aromatic citrus trees. More interestingly, ‘graveolens’ is Latin for “having a strong or offensive smell.”

The less than aromatic odor of the plant makes it useful as a pest deterrent in the garden along with other strong-smelling herbs such as sage. Pest deterrent aside, historically, the reason for planting and harvesting rue herbs is medicinal. The volatile oils of the plant’s leaves have been used to treat insect bites while the dried leaves have been used as a sedative to calm stomach cramping and nerves, and to treat warts, poor eyesight, worms, and scarlet fever. It was also once used to ward off the plague and heal people that were afflicted with witchcraft.

Rue is also known as the ‘herb of grace’ and ‘herb of repentance’ due to its use in some Catholic rituals. Michelangelo and Leonardo de Vinci both used the herb regularly for its purported ability to improve eyesight as well as creativity.

Medicinal uses are not the only reason for harvesting rue herbs in the garden. Although the leaves have a bitter flavor, both the fresh and dried foliage have been used in not only perfumes, but in foods of all sorts, and the ancient Romans used the seeds of the perennial in their cooking.

Today rue is grown primarily as an ornamental in the garden or as part of a dried flower arrangement.

How to Harvest Rue

Rue can be toxic when taken internally; too much of it can cause severe stomach cramping. Just as it is toxic internally, contact with the stringent leaf oils can cause blistering, burning, and itching of the skin. So, when rue herb harvesting, wear gloves, long sleeves, and long pants.

It’s best to harvest rue before it flowers since once the plant flowers, the essential oils diminish. Harvest rue in the early morning when the essential oils are at their peak. The cuttings can then be used immediately, dried, or kept for use for up to a week. To keep rue for up to a week, place the freshly cut stem in a glass of water on the counter, out of the sun, or in the refrigerator wrapped in a damp towel and placed in a sealed plastic bag.