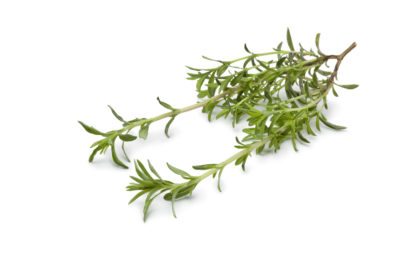 Both summer and winter savory are members of the mint or Lamiaceae family and are relatives of rosemary and thyme. Cultivated for at least 2,000 years, savory has a multitude of uses after harvesting and is a worthy addition to any herb garden. The following article contains information on harvesting savory herbs, such as when and how to harvest savory.

With its peppery taste and spicy aroma, it’s no wonder that savory has found its way into a plethora of dishes. Bean dishes are often associated with savory, and it is often combined with other herbs such as those comprising Herbes de Provence, a classic French combination of herbs. Savory is also said to have an aphrodisiac effect and is useful as an antiseptic and as tonic for digestive ailments.

Savory can be used fresh or dried and is classically infused in vinegar. Some types of savory have tough leaves that are softened with long cooking times such as with bean dishes or stews, hence the term ‘savory stew.’

San Francisco used to be called ‘Yerba Buena,’ which translates to ‘the good herb’ in reference to the low growing, creeping savory native for that region. Early settlers there dried the herb and used it as a tea.

Today, savory can be found in toothpaste and soap as well as in teas and infused vinegars. It pairs well with fowl, wild game, and legumes.

When Do You Harvest Savory?

Summer savory is an annual unlike winter savory, thus it only grows during warm months, then flowers and goes to seed. Begin picking summer savory when it is at least 6 inches (15 cm.) tall. Continue to harvest throughout the growing season as needed.

Winter savory is a perennial and can be picked year-round. Harvest in the morning after the dew has dried and the essential oils are at their peak.

How to Harvest Savory

There’s no big mystery or difficulty when harvesting savory herbs. Cut the leaves and shoots from mature stalks only and don’t snip all the way down to the base of each stalk. Leave most of the stalk behind so the plant will continue to grow. Harvesting summer savory herbs encourages the plant to grow but cutting the plant too severely does not.

Store the savory in a glass of water until ready to use. Use the herbs as soon as possible to take advantage of their fresh peppery essential oils. The longer any fresh herb sits, the less the flavor becomes. Continue picking savory throughout the growing season.

If you wish to dry the savory, bundle the stems with twine and hang the bundle in a well aerated area out of direct sunlight. You can also dry savory in a dehydrator. Set the temperature of the food dehydrator at no higher than 95 degrees F. (35 C.).

Printer Friendly Version
Read more about Savory
<PreviousNext>
Did you find this helpful? Share it with your friends!
FacebookTweetPinEmail
Related Articles
Newest Articles
You might also like…
Additional Help & Information