Sesame Seed Benefits – Should You Be Eating Sesame Seeds 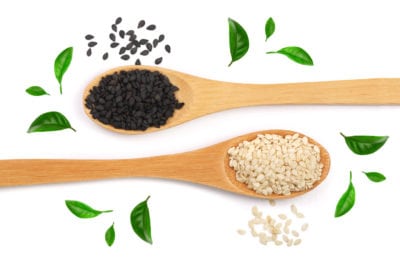 Seeds of many varieties have become the belles of the ball recently. With the rise in popularity of ancient grains, natural oil, herbal therapies, and other healthy living options, using seeds in your diet has a host of advantageous effects. The benefits of sesame seeds, for instance, seem to go beyond adding fiber and nutrition with a tasty crunch. Sesame seed benefits also encourage higher levels of HDL, fight free radicals, boost metabolism, increase antioxidants, increase bone health, and many other possible uses. Read on to lean more.

Are Sesame Seeds Good for You?

What would many of our favorite Asian food dishes be without sesame seeds? These simple seeds have been used in cooking and medicinally for thousands of years – Egyptians, Babylonians, Ancient Asia, Greeks, and Mesopotamians. Signs of their use in the Bronze Age as flour and oil and in the Iron Age for incense lamps have been also found recently. So it’s clear that sesame seed plants have been in use for some time and must have potent benefits as more than just a food.

Sesame seeds are nearly half fat by weight, which isn’t exactly good news in today’s fat conscious diets. However, the fat is mostly unsaturated and the seed also contains protein, iron, zinc, calcium, magnesium, manganese, thiamin, copper, and Vitamin E. To break it down, 3 tablespoons contain 160 calories with 5 grams of protein and 4 grams of fiber.

All in all, sesame seeds seem to have many necessary vitamins and minerals as well as building blocks for cells and “keep you full” fiber. Add up these valuable components and it seems that eating sesame seeds is at least an occasional beneficial treat.

The tiny seeds are often pressed into an aromatic and tasty oil. This oil has also been traditionally used to soothe skin conditions. It is purported to be an excellent preventative for diaper rash when used on babies. In adults, the smoothing properties may help delay wrinkles and other signs of age.

Some experts suggest the oil is also an antibacterial and can be used to fight acne and other common blemishes. Sufferers of eczema and psoriasis may want to take note. There are indications that sesame oil can help alleviate the painful itching associated with both of these skin disorders.

Eating sesame seeds daily is not recommended because they have high levels of lectin, which can stimulate an autoimmune response that irritates the gut lining. Of course, you would really have to eat a lot of the seeds and oil to have such a response. Instead, let’s focus on the constructive use of the seeds and oil for internal ailments.

Using sesame seeds in food can increase antioxidants and enzymes that protect against oxidative damage. They are also used to treat osteoarthritis, fight diabetes, and may enhance bone health and protect against some cancers. That’s quite a list for a tiny little seed.