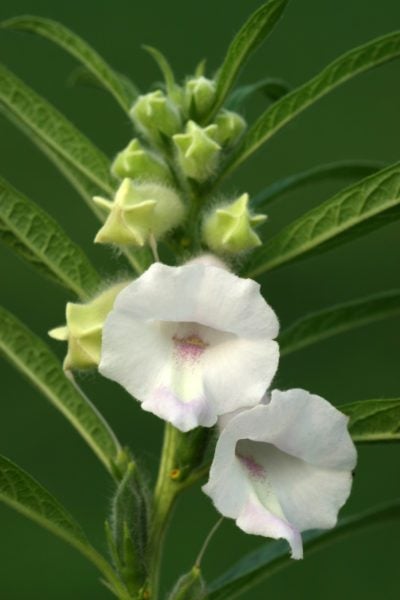 What are benne seeds? Chances are you already know about benne seeds, which are more commonly known as sesame seeds. Benne is an ancient plant with a recorded history of at least 4,000 years. The seeds were highly valued during colonial times, but in spite of their nutritional benefits, benne hasn’t gained a following as a food crop in the United States. Today, benne seeds are grown in Texas and a few other southwestern states, but most often, the seeds are imported from China or India.

Is there a difference between benne seeds and sesame seeds? Not a bit. Benne is simply the African name for sesame (Sesamum indicum). In fact, many plant historians believe benne was brought to the New World in slave ships. The name is largely a regional preference and sesame seeds are still known as benne in certain areas of the deep south.

Sesame seeds are a great source of minerals including copper, magnesium, calcium, iron, manganese, zinc, and selenium. They are also rich in vitamins B and E and protein, and the high fiber content makes them an effective treatment for constipation. Benne health benefits include the oil, which is healthy for the heart and used to treat various skin conditions, including sunburn.

The sesame plant is a drought tolerant annual that can reach heights of 2 to 6 feet (61 cm. to 2 m.), depending on plant variety and growing conditions. White or pale pink, bell-shaped flowers bloom for several weeks during the summer.

Sesame plants grow in most soil types, but they thrive in fertile soil with a neutral pH. Well-drained soil is a requirement, as sesame plants don’t tolerate soggy growing conditions. Full sunlight is best for growing benne seeds.

Sesame (benne) seeds for planting are often sold by seed companies that specialize in heirloom plants. Start benne seeds indoors about a month before the last expected frost. Plant the seeds in small pots, covered with about ¼ inch (6 mm.) of a good quality, lightweight potting mix. Keep the potting mix moist and watch for seeds to germinate in a couple of weeks. Transplant sesame plants outdoors after temperatures have reached 60 to 70 degrees F. (16-21 C.).

Alternatively, plant sesame seeds directly in the garden in moist soil after you’re certain all frost danger has passed.

Printer Friendly Version
Read more about Sesame Plant
Next>
Did you find this helpful? Share it with your friends!
FacebookTweetPinEmail
Related Articles
Newest Articles
You might also like…
Additional Help & Information