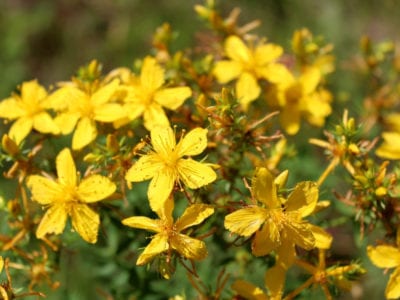 You may know about St. John’s wort for medicinal purposes such as the relief of anxiety and sleeplessness. When you find it spreading throughout your landscape, however, your main concern will be getting rid of St. John’s wort plants. Information on St. John’s wort says it’s a noxious weed in some areas.

Learning how to control St. John’s wort is a long and tedious process, but may be accomplished through significant effort. When you begin getting rid of St. John’s wort, you’ll want to continue until the weed is completely under control.

St. John’s Wort weed (Hypericum perforatum), also called goatweed or Klamath weed, like many invasive plants of today was introduced as an ornamental in centuries past. It escaped cultivation in the United States and is now listed as a noxious weed in several states.

Native plants in many ranchlands are forced out by this weed that can be deadly to grazing cattle. Learning how to control St. John’s wort is necessary for ranchers, commercial growers, and home gardeners as well.

How to Control St. John’s Wort

It may take weeks or even months of pulling or digging to get rid of St. John’s wort. Burn the weeds after pulling. Don’t burn off the area where St. John’s wort weed is growing though, as this encourages it to spread. Mowing may be a somewhat effective method too, according to info on St. John’s wort control.

For larger areas where manual control is not feasible, you may need to bring in chemicals for St. John’s wort control, such as 2,4-D mixed at 2 quarts per acre (2 L. per acre).

Insects such as the flea beetle have been successful in getting rid of St. John’s wort in some areas. If you have a substantial problem with this weed on a bigger acreage, talk to your county extension service to learn if insects have been used in your area to discourage the weed.

An important part of control includes learning to recognize the weed and scouting your property on a regular basis to see if it is growing.

Printer Friendly Version
Read more about St. John's Wort
Next>
Did you find this helpful? Share it with your friends!
FacebookTweetPinEmail
Related Articles
Newest Articles
You might also like…
Additional Help & Information