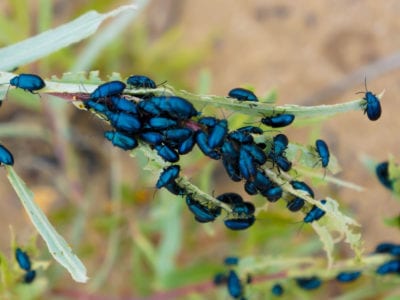 Flea beetles are small but destructive pests in the home landscape. You will likely see their damage in the tiny holes scattered across your prized hosta or ornamental kale. There are many varieties of the insect, which attack a wide range of vegetation. Flea beetle control is an ongoing battle that relies upon three levels of approach. Control of flea beetles naturally starts with consistent cultural practices, physical barriers, and even biological methods.

How to Get Rid of Flea Beetles

Knowledge of your enemy is the first key to flea beetle control. The insects are small beetle-type pests that hop when disturbed. The larvae overwinter in the garden and become adults in spring. There may be up to two generations of the tiny shiny beetles per year. Some varieties are striped or spotted and may be brown, tan, and black.

It is easier to prevent the damage rather than to kill flea beetles unless you resort to chemical controls. Control of flea beetles naturally is preferable, especially in the vegetable garden where the insects do the most damage.

Physical barriers such as row covers are safe and easy methods of controlling flea beetles. These prevent the insects from jumping onto the leaves and munching away on the foliage. You can also use a layer of thick mulch around plants to limit the insect’s transformation in the soil from larvae to adult. This provides a non-toxic pre-season way to control flea beetles naturally. For more permanent control, it is necessary to kill flea beetles.

The most reliable method on how to get rid of flea beetles is with an insecticidal dust. Naturally derived spinosad and permethrin are two control agents that can provide some assistance in eradicating the beetles. Consistent applications are necessary because of the mobility of the pests. Any insecticidal product that contains carabyl or bifenthrin will also give adequate control when applied at the rates and times recommended by the product manufacturer.

If chemical control is not your cup of tea and covering the crop is not an option, try repellent formulations. Flea beetles are most active in spring when adults emerge and their feeding can severely damage seedling plants. Diatomaceous earth is safe for pets, children, and most beneficial insects, but will repel most flea beetles. Neem oil and some horticultural oils are also effective at repelling flea beetles.

How to Kill Flea Beetles Naturally

Cultural control is the key to killing flea beetles. The larvae overwinter in soil and can be destroyed during regular hoeing and cultivating. Remove all old debris from the previous crops and prevent weeds, which are an important early season food for flea beetle larvae. Without cover and food supplies, the larva will starve. Early season flea beetle control will kill most of the pests and physical barriers, or even sticky traps, can take care of most of the remaining pests.

Note: Any recommendations pertaining to the use of chemicals are for informational purposes only. Specific brand names of commercial products or services do not imply endorsement. Chemical control should only be used as a last resort, as organic approaches are safer and more environmentally friendly.