Stevia Plant Care: How And Where Does Stevia Grow 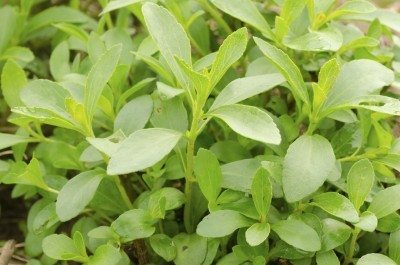 Stevia is a buzzword these days, and this is probably not the first place you’ve read about it. A natural sweetener with essentially no calories, it’s popular with people interested in both weight loss and natural eating. Exactly what is stevia though? Keep reading for stevia plant information.

Stevia (Stevia rebaudiana) is a nondescript looking leafy plant reaching 2 to 3 feet (61-91 cm.) in height. It is native to Paraguay, where it’s been used for centuries, possibly millennia, as a sweetener.

Stevia leaves contain molecules called glycosides, essentially molecules with sugar attached to them, making the leaves taste sweet. The human body, however, cannot break apart the glycosides, meaning they have no calories when consumed by humans.

It is used as a food additive in many countries, accounting for 40 percent of Japan’s sweetening additives. It was banned as an additive in the United States for over a decade due to possible health risks, however, and only in 2008 was allowed again.

Stevia has been declared safe by the FDA and has been used continuously internationally, so there’s no reason not to grow your own plant as a home sweetener and great conversation piece. Stevia is a perennial in USDA growing zones 9 and warmer.

The roots may survive in zone 8 with protection, but in colder areas it will grow very well in a container brought indoors for the winter. It can also be treated as an annual outdoors.

Stevia plant care is not too intensive –place it in loose, well-drained soil in full sun and water frequently but shallowly.

How to Use Stevia Plants in the Garden

You can harvest your stevia plant to use as your own natural sweetener. While you can harvest the leaves and use them throughout the summer, they’re at their sweetest in autumn, just as they’re getting ready to flower.

Pick the leaves (all of them if you’re treating it as an annual) and dry them by placing them on a clean cloth in the sun for an afternoon. Save the leaves whole or crush them into a powder in the food processor and store them in an airtight container.