Sugarcane Insect Control – How To Deal With Sugarcane Plant Pests 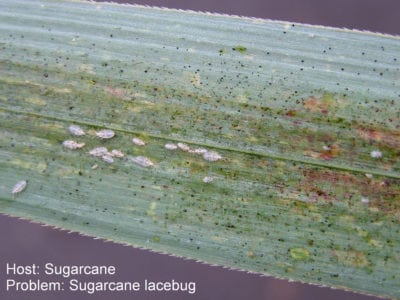 In Florida alone, sugarcane is a $2 billion/year industry. It is also grown commercially in United States in Hawaii, parts of Texas and California, and worldwide in many tropical to semi-tropical locations. Like any commercial crop, sugarcane does have its share of pests that can sometimes cause significant crop loss in sugarcane fields. And if you grow sugarcane plants in the home garden, they may affect yours too. Continue reading to learn about common pests of sugarcane.

How to deal with sugarcane plant pests depends largely on which one is affecting your crop. Below are some of the more common culprits you’ll come across when cultivating sugarcane.

White grub infestations can be difficult to diagnose because they remain below the soil in their larval stage. However, plants may display yellowing foliage, stunted, or distorted growth. Sugarcane plants may also just suddenly fall over due to a lack of stems and roots to anchor them in place. Chemical controls of sugarcane grubs are ineffective. The best control methods for these pests are regular flooding or discing of sugarcane fields.

Borers are one of the most destructive bugs that eat sugarcane, specifically the sugarcane borer Diatraea saccharalis. Sugarcane is this borer’s main host plant, but it can infest other tropical grasses as well. The sugarcane borers tunnel into the stalks where they spend their larval stage eating the soft, inner plant tissues.

Symptoms of borers in sugarcane include borer holes in stalks and foliage, chlorosis, as well as stunted or distorted growth. Insecticides containing neem oil, chlorantraniliprole, flubendiamide, or novaluron have proven to be effective sugarcane insect controls for borers.

Wireworms, the larvae of click beetles, can also cause crop loss in sugarcane fields. These small, yellow-orange worms feed on the roots and bud nodes of sugarcane plants. They can leave large holes in sugarcane plant tissues, and their mouthparts oftentimes introduce secondary bacterial or viral infections to the plant. Flooding sugarcane fields in late spring, then again in summer generally kills wireworms, but insecticides containing phorate are also effective.

In commercial sugarcane fields, some pest problems are expected and tolerated. Some other common but less damaging sugarcane plant pests are:

Insecticides, such as neem oil, or beneficial insects, such as ladybugs, are effective sugarcane pest control methods.

Printer Friendly Version
Read more about Sugarcane
<Previous
Did you find this helpful? Share it with your friends!
FacebookTweetPinEmail
Related Articles
Newest Articles
You might also like…
Additional Help & Information