Leafhopper Damage On Plants: How To Kill Leafhoppers 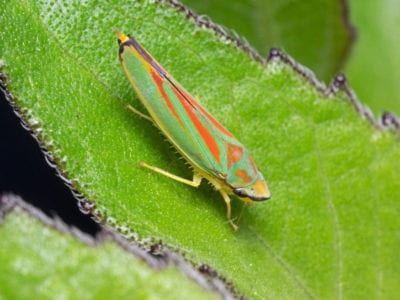 Pesky leafhoppers are tiny insects with an insatiable appetite. Leafhopper damage on plants can be extensive, so learning how to kill leafhoppers in the garden and ridding lawns of leafhopper pests is important.

Leafhoppers range in size from 3 to 15 mm. Their wings are positioned like a roof over their backs and they have small spines on both hind legs. Although most leafhoppers are green, they can range in colors, especially the ones that live in the turf grass that can be more brownish in color. Nymphs are even smaller with small wing buds. Common host plants include maple, apple, cottonwood, dogwood, oak, poplar, willow, and ornamental plants.

Many people do not bother with leafhopper control in lawns, as the damage is extremely hard to spot. However, some homeowners use insecticidal sprays on their lawns, which seem to do an admirable job at controlling populations.

Leafhoppers in certain states often attack apples, grapes, potatoes, and roses in the home garden where damage may be more noticeable. All stages of the insect feed on sap from leaves. Leaves become white, stippled in spots.

Leafhopper damage on plants in the garden is remarkably similar to that of spider mites. With an increase in populations, dark excrement can be seen on plants, making them unattractive. Damage can be more serious when leafhoppers carry bacteria from plant to plant. This is seen in a number of tree species such as elm, oak, maple and sycamore and results in leaf scorch.

Leafhoppers are often found on the underside of the leaves.

How to Kill Leafhoppers

Plants in the home garden that display signs of leafhopper damage should be promptly removed and thrown out to avoid further spread of bacteria. It is vital not to over fertilize plants, as this will only encourage leafhopper activity.

Insecticidal soaps can be used when the leafhoppers are young, but because of their mobility, they are difficult to eradicate completely. Nurseries often use a systemic spray on trees and bushes. However, treating leafhoppers must involve careful monitoring, as sprays are most effective before adults appear.

As always, caution must be used when using any chemical in the garden. Consult a professional before you do any widespread spraying.