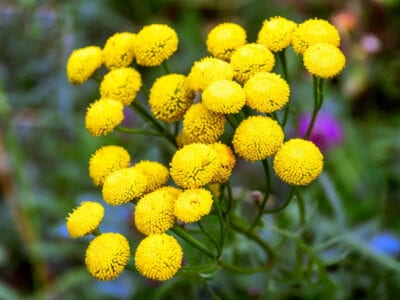 Tansy is an herbaceous perennial plant, often deemed as a weed. Tansy plants are common in the United States, particularly temperate regions. The scientific name for common tansy, Tanacetum vulgare, may be an assertion to its toxic properties and invasive nature. If you are wondering, “what is tansy,” you have probably seen it frequently.

Tansy plants are found growing wild in meadows, roadsides, ditches, and other natural areas. The weedy herb is also an attractive flowering addition to a cottage or wildflower garden, but watch out or the plant will spread to unwanted areas. Keep an eye on the plant and learn methods on how to keep tansy from taking over the garden.

What is tansy? The plant may get 3 to 4 feet (1 m.) tall and sports button-like yellow flowers on top of stiff stems. The leaves are ferny and alternate on reddish purple stems. The flowers grow in clusters and are from ¼ to ½ inch (6 mm. to 1 cm.) in diameter.

Common tansy plants reproduce prolifically from seed or rhizomes. Using tansy in landscaping borders with other flowers combines its ease of care with the sunny blooms for an upbeat perennial plant.

Tansy plants need little supplemental care, other than the occasional watering. Their hardiness means they thrive in most areas of the country but they can become a nuisance if not managed carefully.

You should probably not plant tansy in most areas of the United States. It is a noxious weed in 45 of the states and can push out natural vegetation. If you already have the plant and like its appearance, allow it to reseed in a controlled area. Let’s learn more about the control of tansy plants.

How to Keep Tansy from Taking Over

Tansy is a Class C noxious weed in parts of the western states. The plants were originally introduced as decorative flowers and then became “naturalized” in the U.S. The plant was once an important part of herb gardens and used to treat colds and fevers. Crushed seeds emit a strong odor and the oil has powerful properties, which may become toxic if ingested in large quantities.

Tansy will spread quickly from its seed and less invasively from rhizomes. The seed is viable in soil for quite some time, so it is best to cut off the flower heads before they turn into seeds.

Where you have tansy in landscaping, use cultivation practices to prevent spread. Dig out clumps of the plant where you do not wish to have it and keep old plant matter cleaned up to prevent self-seeding.

Hand pulling the plants as you would pull weeds can prevent the plant from spreading. You should do this with gloves, as there have been some reports of contact toxicity. It is unlikely to be toxic to grazing animals, but minimize the spread by mowing areas with the plant when they are in bud stage.