Valerian
By: Becca Badgett, Co-author of How to Grow an EMERGENCY Garden
Printer Friendly Version 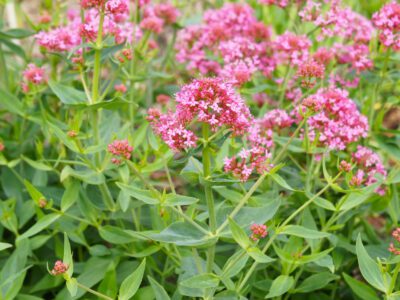 For spring and summer color and ease of care, add red valerian plants (also known as Jupiter’s beard) to the full sun herb garden or flower bed. Botanically called Centranthus ruber, Jupiter’s beard adds tall and bushy color in the landscape and is ideal as an easy-care background border plant.

The Jupiter’s beard plant reaches 3 feet (0.9 m.) in height, often the same in width, and displays profuse panicles of fragrant red flowers. Colors of white and pink are found in some cultivars of the wild red valerian plants. Native to the Mediterranean, the Jupiter’s beard has successfully transitioned to many areas of the United States and attracts butterflies and the all-important pollinators to the area in which it is planted.

Leaves and roots of growing Jupiter’s beard are edible and may be enjoyed in salads. As with all edible plants, avoid eating chemically treated specimens.

This plant flourishes in many types of soil, including poor soil, as long as it is well draining. Red valerian plants also enjoy a sunny location in the garden but will tolerate some partial shade as well.

The care of red valerian is minimal, making it an enjoyable specimen in the garden. Part of its care includes thinning seedlings to a manageable level, depending on how many more of the Jupiter’s beard plant you want in the flower bed. Deadhead flowers of growing Jupiter’s beard before seeds form to decrease re-seeding.