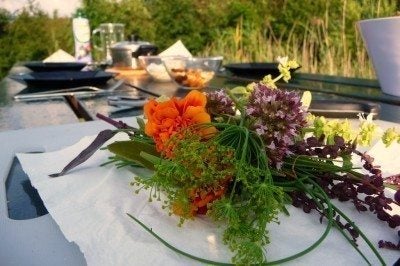 When growing edible flowers, avoid the use of chemical pesticides and fertilizers and always know which flowers are edible before consuming them. There are many resources available on edible plants and flowers. Always check these reliable sources before attempting to eat anything you are unsure of.

What are Some Edible Flowers?

Edible flowers come in nearly all shapes and sizes and can perform the same landscape functions as ornamental plants. Some of the most popular plants in the garden actually have edible flowers.

Other Flowers You Can Eat

Not all edible blooms come from flower beds. Did you know that broccoli, cauliflower, and artichokes are all flowers? For instance, the part of the broccoli that we eat is technically the flowering part of the broccoli plant. If you leave the broccoli in the garden, it will eventually open up and reveal its beautiful, yellow flowers. These flowers are edible both before and after they have opened up. The same applies with the other two. And you just thought they were vegetables.

Squash blossoms can also be eaten and are oftentimes dipped in light batter and fried. They have a sweet flavor.

Many herb flowers are just as tasty as their foliage. Some of these include:

Thyme plants may be considered as some of the most aromatic herbs, but their tasty flowers are also a wonderful addition to salads, sauces, and pasta dishes. Borage not only smells like cucumber but it tastes similar to them as well. The vivid, blue flowers also make great additions to salads.

While some consider it a weed, dandelions are actually herbs and quite tasty ones too. All parts of this so-called weed are edible and are great fried or added to salads.