Wintercress Information: What Is A Yellow Rocket Plant 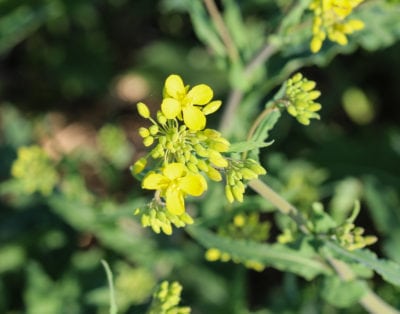 Wintercress (Barbarea vulgaris), also known as yellow rocket plant, is an herbaceous biennial plant in the mustard family. Native to Eurasia, it was introduced into North America and is now commonly found throughout the New England states. What are wintercress uses? Is wintercress edible? The following wintercress information discusses growing wintercress and its uses.

What is a Yellow Rocket Plant?

In its first year, the plant forms a rosette of leaves. In its second year, the rosette bolts up with one or more flowering stalks. This cool season annual to biennial grows to about 8-24 (20-61 cm.) inches in height.

It has long leaves capped by rounded ends and with a lobed or indented lower section. The flowering rosette becomes an inflorescence of bright yellow blooms in the spring that rise up above the foliage.

Yellow rocket plant can be found in fields and along roadsides, especially those that are wet or boggy, along stream banks and amongst wetland hedges. It favors growth in cultivated fields of timothy hay and alfalfa, and since it matures prior to these crops, is often cut so the seeds travel along with the forage.

The young leaves of wintercress are indeed edible in the early spring but they later become quite bitter (lending to another of its common names – bittercress). Once introduced to North America, wintercress naturalized and has now become a noxious weed in some states, as it easily reseeds itself.

Since wintercress is edible, some folks might like to grow it (provided it is okay to do so in your region – check with your local extension office first). It can grow in sandy or loamy soil but prefers full sun and moist soil.

But in areas where wintercress has naturalized, it is just as easy to forage for the plant. It is simple to spot its large leaved, deeply lobed rosette during winter months and it as one of the first herbs to show itself in spring.

Wintercress is an early source of nectar and pollen for bees and butterflies. The seeds are eaten by birds like doves and grosbeaks.

Beyond its uses for animal fodder, wintercress is rich in vitamins C and A, and was an anti-scurvy plant in the day before vitamin C was readily available. In fact, another common name for wintercress is scurvy grass or scurvy cress.

Young leaves, those before the plant blooms on second year plants or those after the first fall frost on first year plants, can be harvested as salad greens. Once the plant blossoms, the leaves become too bitter to ingest.

Only use small amounts of raw chopped leaves at a time, more as you would when harvesting and employing it as an herb rather than a green. It is said that the ingestion of too much raw wintercress can lead to kidney malfunction. Otherwise, it is advisable to cook the leaves. They can be used in stir fries and the like and apparently taste like strong, stinky broccoli.

Printer Friendly Version
Read more about Wintercress
Next>
Did you find this helpful? Share it with your friends!
FacebookTweetPinEmail
Related Articles
Newest Articles
You might also like…
Additional Help & Information