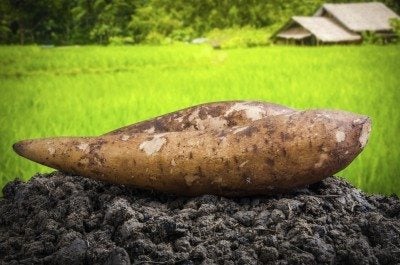 Yacon (Smallanthus sonchifolius) is a fascinating plant. Above, it looks something like a sunflower. Below, something like a sweet potato. Its taste is most frequently described as very fresh, a cross between an apple and a watermelon. It is also known as sweet-root, Peruvian ground apple, Bolivian sunroot, and pear of the earth. So, what is a yacon plant?

The yacon is native to the Andes, in present-day Colombia, Bolivia, Ecuador, and Peru. It’s gaining worldwide popularity, however, in part because of its unusual source of sweetness. Unlike most tubers, which get their sweetness from glucose, yacon root derives its sweetness from inulin, which the human body can’t process. This means you can taste the sweetness of yacon root, but your body won’t metabolize it. This is good news for people looking to lose weight and especially good news for diabetics.

The yacon plant can grow to 6.5 feet (2 m.) in height, topped in small, daisy-like yellow flowers. Underground, there are two distinct elements. On top is a collection of reddish rhizomes that looks a bit like a ginger root. Below that are the brown, edible tubers, very similar in appearance to a sweet potato.

How to Grow Yacon Plants

Yacon does not propagate by seed, but by rhizome: that clump of red just below the soil. If you are beginning with unsprouted rhizomes, keep them in a dark place, slightly covered in damp sand.

Once they’ve sprouted, plant them at a depth of 1 inch (2.5 cm) in well-worked, composted soil, and cover them with mulch. The plants are slow to grow, so if you live in an area that experiences frost, start them indoors in very early spring. Their growth is unaffected by day length, so if you live in a frostless area, they can be planted at any time of the year.

Yacon plant care is easy, though the plants get very tall and may need to be staked. After six to seven months, the plants will naturally start to brown and die. This is the time to harvest. Dig around carefully with your hands so as not to damage the roots.

Set out the tubers to dry– they can sit in the sun for as much as two weeks to heighten sweetness. Then, store them in a cool, dry, ventilated place. Set aside the rhizomes for next year’s planting.