What’s The Best Natural Mulch For My Garden? 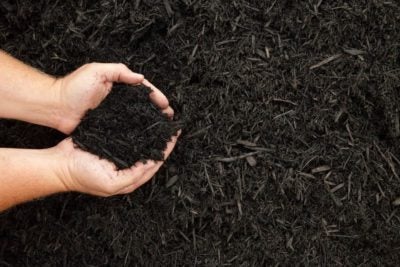 Spring is coming and it’s time to start thinking about mulching your flower beds for the summer. Natural mulch is extremely beneficial for a garden. It traps moisture in the soil so you don’t have to water as often, and it acts as an insulator so your plants’ roots don’t get too hot. (It has the same insulating effect in the winter, keeping plants from getting too cold.) It also suppresses weeds, so you don’t have to weed as often!

What is the Best Natural Mulch?

There are a number of natural mulches out there, with hardwood bark mulch, pine straw, and old hay most popular. Which is the best choice for your garden?

Pine straw is good for suppressing weeds. It has a tendency to form a thick mat, and woe to the weed that tries to come up through that! However, pine straw is not for every garden. Over time it can turn your soil acidic and make it difficult to grow anything. Some plants love acid soil. If your flower bed is primarily made up of these acid-loving plants, then pine straw is not only okay, it’s perfect.

Most people’s gardens grow plants that prefer their soil neutral to sweet (alkaline). Hardwood bark mulch is the best for those plants. It decomposes into a rich, sweet-smelling, black dirt and it looks ever so tidy while doing it. Plus, hardwood bark mulch is the best for amending your soil. The problem is, it’s expensive, especially when you’re buying it from a garden center (and they’re not big bags, either).

Using hay as a natural mulch

Old hay, on the other hand, is dirt cheap. If hay gets wet and spoils, farmers can’t use it to feed their animals anymore; it might kill them. For a gardener, however, that spoiled hay is exactly what your garden needs. In fact, your garden will probably like it better than the fresh, unspoiled stuff and your vegetable garden will probably like it better than the hardwood bark mulch. You can often get an entire bale of spoiled hay for just a couple of bucks.

The problem with old hay, of course, is that hay is made from grass (or grains). Grass in a garden is a weed, and that hay is just chock full of the seeds of its kind, plus some other weeds that may have gotten bundled up with it. What’s a gardener to do?

In her ought-to-be famous “No Work Garden Book,” Ruth Stout has a very simple solution for what to do– just add more hay. Hay piled around plants to a depth of about a foot (31 cm.) is too thick for weeds– even its own weeds, to get through. It’s a great solution for the vegetable beds (and it really does work).

For the flower beds, however, it has the unfortunate effect of making them look untidy, and an untidy flower bed might just as well be full of weeds.

So then, what is the best natural mulch choice?

What’s the best solution for the gardener? In general, for the flower beds, go with a simple bark mulch. It isn’t as good as hardwood bark mulch, but it isn’t as expensive either. Spread it 4 to 6 inches (10-15 cm.) thick around your flowers, making sure to cover the whole bed.

For the back garden and the vegetable garden, go find a farmer and buy up as much of his old, spoiled hay as you can afford. Spread it 8 to 10 inches (20-25 cm.) at first; increase it to a foot (31 cm.) if some intrepid weeds start poking their heads out (but be sure to pull the weeds out, or they’ll just keep going like the proverbial beanstalk).

Mulch has many benefits for your garden. What are you waiting for? Start mulching!

Printer Friendly Version
Read more about Mulch
Next>
Did you find this helpful? Share it with your friends!
FacebookTweetPinEmail
Related Articles
Newest Articles
You might also like…
Additional Help & Information