Cutting Back Yarrow – Information On Pruning A Yarrow Plant 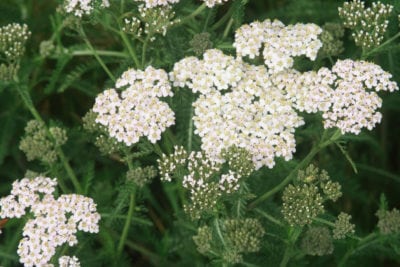 Yarrow can be an eye-popping feature to any garden with its umbrella-shaped flower clusters that are available in a show of colors that span the rainbow. It is also an attractive plant to gardeners because it is low maintenance, drought resilient, and relatively pest free. Please keep in mind that “low maintenance” is not the same as “no maintenance.” Some yarrow trimming still needs to take place because letting yarrow go au naturel isn’t such a good idea. Let’s learn more about how to prune yarrow and why pruning a yarrow plant is important.

How to Prune Yarrow

Yarrow flowers will become faded and brown over the course of their growing season. You will want to deadhead these unattractive spent flowers not only for aesthetic reasons, but also to encourage further blooming. This deadheading, or yarrow trimming, is advocated because yarrow is an aggressive self-sower. Removing the spent blooms will prevent the yarrow flowers from drying out, going to seed, and spreading all over your garden.

Once the spent blooms are removed, energy is then diverted into creating more blower buds. Another reason for deadheading has to do with genetics. Yarrow is said to have a propensity for crossbreeding, so if you do let the plant self-sow, you might end up with plants that have reverted to their parent form, namely the wild yarrow with white-gray blooms.

To deadhead after the plant’s initial flowering, examine the yarrow stem underneath the spent cluster of blooms. Simply take a pair of pruning shears and cut the stem back above a lateral bud. It is from these lateral buds that side flower shoots are produced. When cutting back yarrow, you may want to consider pruning it back by at least half, given the plant’s propensity to be floppy and tip over.

Prune the entire stem to the lower basal foliage (the foliage at the bottom of the stem, down by the ground) after all the spring/early summer blooms are done. Cutting back yarrow will help maintain plant health and vitality, as it will encourage new growth with stronger stems with the potential for additional fall blooms. Prune back to the basal leaves again in late fall or early winter. The basal leaves will help protect the yarrow plant during the winter.

When pruning yarrow, you may want to consider wearing a pair of gardening gloves, as some people suffer allergic reactions from handling the plant.

Practice good garden sanitation when cutting back yarrow. Dispose of seed heads and all dead foliage in an appropriate receptacle such as a compost bin. This will help keep disease and insects at bay.

Pruning a yarrow plant can happen before the blooms are spent. Let your inner florist shine and cut some blooms of yarrow to use in flower arrangements.

Printer Friendly Version
Read more about Yarrow
<PreviousNext>
Did you find this helpful? Share it with your friends!
FacebookTweetPinEmail
Related Articles
Newest Articles
You might also like…
Additional Help & Information