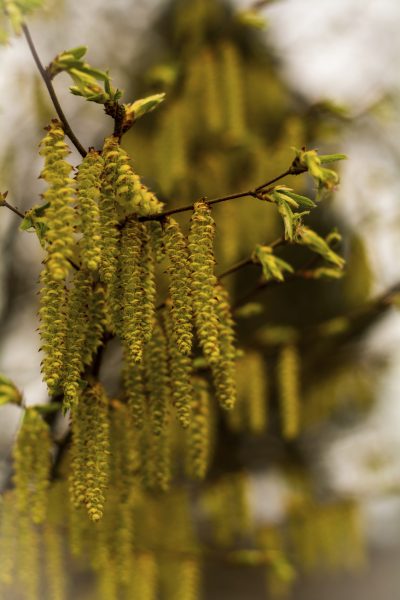 Hazelnuts have a unique biologic process wherein fertilization follows hazelnut tree pollination after 4-5 months! Most other plants fertilize a few days after pollination. This made me wonder, do hazelnut trees need to cross-pollinate? Seems like they could use all the help they can get, right?

Getting to be a hazelnut is a rather long process. Hazelnut flower clusters are produced more than a year before the nut is ready to harvest.

First, male catkins begin to form in mid-May, appear in June, but don’t actually reach maturity until December or January. Female flower parts begin to form at the end of June toward the first part of July and are first visible in late November to early December.

Peak hazelnut tree pollination occurs from January through February, depending upon weather conditions. During pollination of hazelnuts, the female is a brilliant red feathery tuft of stigmatic styles poking out from the bud scales. Inside the bud scales are the lower portions of 4-16 separate flowers. Most plant flowers have an ovary containing ovules with egg cells primed for fertilization, but hazelnut flowers have several pairs of long styles with stigmatic surfaces receptive to receive pollen and a tiny bit of tissue at their base called the ovarian meristem. Four to seven days after pollination, the pollen tube grows to the base of the style and its tip becomes blocked off. The entire organ then takes a breather.

Pollination jump-starts development in the ovary from the tiny meristematic tissue. The ovary slowly grows over the course of 4 months, until mid-May, and then speeds up. The remaining majority of growth occurs during the next 5-6 weeks, and fertilization occurs 4-5 months after pollination! Nuts reach full size about 6 weeks after fertilization in early August.

Although hazelnuts are monoecious (they have both male and female flowers on the same tree), they are self-incompatible, meaning a tree can’t set nuts with its own pollen. So, the answer is yes, they need to cross-pollinate. Also, some varieties are cross-incompatible, making pollinating hazelnut trees all the more difficult.

Hazelnuts are wind pollinated so there must be a compatible pollinizer for effective pollination. Additionally, the timing is crucial since the receptivity of the female blossoms needs to overlap with the timing of the pollen shed.

Generally, in hazelnut orchards, three pollinizer varieties (those that are pollinating early, mid, and late in the season) are placed throughout the orchard, not in a solid row. Pollinizer trees are placed every third tree in every third row for an orchard planted at 20 x 20 foot (6×6 m.) spacing when pollinating hazelnut trees.

Printer Friendly Version
Read more about Hazelnut
<PreviousNext>
Did you find this helpful? Share it with your friends!
FacebookTweetPinEmail
Related Articles
Newest Articles
You might also like…
Additional Help & Information