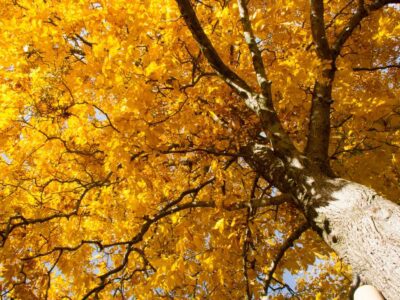 With a common name like “pignut hickory,” this is a tree that grabs your attention. And rightly so. Though not well-known outside the eastern part of the US, it is a very attractive, slow-growing native tree.

Read on for more information about this useful tree.

Pignut hickory (Carya glabra) is a tall, deciduous tree, native to the Eastern areas of the United States. It can grow to 100 feet (33 m.) in the wild, with short, picturesque branches and a spreading crown. This hickory makes an excellent shade or street tree in cultivation since it is attractive in all four seasons.

In springtime, the pignut hickory tree’s bud scales open. They fold back, looking like petals, as the new pignut hickory leaves emerge. The rich green foliage grows quickly and creates welcome shade in summer. Leaves blaze yellow in fall and when the branches are bare, the unusual pignut hickory bark provides winter interest.

The pignut hickory got its common name centuries ago when hogs were found to be eating its small, nutritious nuts. These pignut hickory nuts are pear shaped and ripen in autumn. The husks are green when young, but turn brown and dry as they mature and split away from the nuts.

The hickory nuts are too bitter for human consumption, but a variety of wildlife species rely on them for food. However, the dropping fruit and husks, as well as leaves in fall, create quite a lot of litter. That makes it advisable to plant pignut hickory trees in a large, park-like setting rather than near a residence.

Pignut hickory trees are hardy from U.S. Department of Agriculture plant hardiness zone 4 or 5 through zone 9. They grow best in direct sun, but they can also do well in partial shade. They do require well-drained, acidic soils, but are otherwise undemanding. Their deep roots allow them to adapt to sandy or clay soils.

There are many ecological benefits to planting these trees. They are host plant for a large variety of butterflies and moths, including the large luna moth. Certain caterpillars also find a home and nurture in the pignut hickory. The hickory nuts are a favorite food of many woodland creatures including black bears, deer, squirrels, chipmunks, foxes, mice and wood ducks.

Printer Friendly Version
Read more about Hickory
<Previous
Did you find this helpful? Share it with your friends!
FacebookTweetPinEmail
Related Articles
Newest Articles
You might also like…
Additional Help & Information