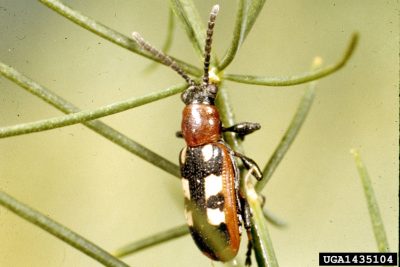 The sudden appearance of colorful orange and black beetles in your garden may feel like a good omen — after all, they’re cheery and look sort of like ladybugs. Don’t be fooled. Despite the similar coloration, asparagus beetles on plants spell trouble.

Asparagus beetles are (not surprisingly) most common and damaging on asparagus plants. Both adults and larvae feed on the spears and tips, scarring them. Spears become extremely unappetizing when frass is staining them and eggs are deposited in the tips. In addition, the larvae of the spotted asparagus beetle will feed inside developing berries and consume foliage.

How to Get Rid of Asparagus Beetles

In most situations, organic treatment for asparagus beetles is recommended, unless populations are enormous or asparagus plants are in serious danger. As soon as you notice asparagus beetles, begin hand picking them daily, tossing them into a bucket of soapy water. If you see any brown eggs on spears, make sure to scrape those as well.

Cutting asparagus shoots as they appear and leaving no more than two days between harvests can help prevent eggs from hatching. Even if the spears are contaminated with eggs, cut them as soon as they are large enough to harvest.

Neem oil can be applied to plantings that have serious infestations, especially in years when harvesting is not recommended. Coat the spears thoroughly, applying neem to new spears each week. Collecting berries at the end of the season can help keep spotted asparagus beetles at bay.

If asparagus beetle on plants are severe and immediate control is necessary to save your asparagus, both pyrethrin and malathion can be used without causing serious harm to beneficial insects. These chemicals are short-acting, lasting only a few days, but potent. Beetles that keep coming and coming on an asparagus path may be knocked back with permethrin, but be aware that this chemical has a much longer duration and will kill most insects that contact the asparagus stand.