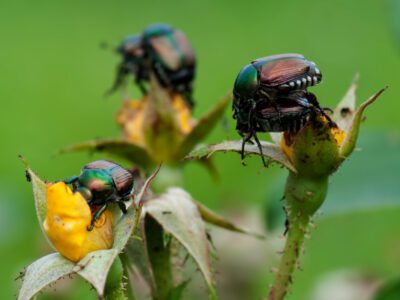 There is nothing more frustrating to the rose loving gardener than this nasty pest from the land of the rising sun known as the Japanese beetle. A beautiful rose bed one day can be turned into a field of tears in just moments by an attack of these garden bullies. Let’s look at some ways on how to control Japanese beetles on roses.

How to Get Rid of Japanese Beetles on Roses

I have read about various methods to try to control and be rid of them from covering all the roses with a tight woven mesh netting to hanging Bounce dryer sheets in the rose bushes.

After all the reading I have done about Japanese beetles and rose damage, it appears that one of the best ways to attack them is a two pronged approach. At the very first signs of any Japanese beetles entering your area, not even necessarily your rose beds or gardens, buy a product called Milky Spore. This spore is eaten by the Japanese Beetle Grubs and has a bacterium that kills the grubs. Upon killing the grubs, even more of the milky spore is generated, thus helping to kill even more grubs. This method can take three to four years to spread enough through the garden areas, depending upon the size of the garden, to make the impact desired on these bullies.

If going this route, it is extremely important to use an insecticide to kill the adult beetles that will not kill the grubs as well. Killing the grubs that eat the milky spore slows up or stops the spread of the milky spore and, thus, can negate its impact upon the beetles you are trying to gain control over. Even if your rose beds are heavily under attack, the milky spore seems worth a try.

Spraying and killing the adult beetles prior to them laying their eggs to start the cycle all over again is of great importance as well. The use of products called Sevin or Merit to spray are a couple of University Test Lab listed choices, being careful to keep the spray application high to mid range of the bush and not directly on the ground or base of the bush. Move quickly with the spraying so as not to get a lot of over spray or dripping onto the ground below.

Another choice of insecticide might be one called Safer BioNeem, which has shown some real promise in control.

There are some plants that seem to repel the Japanese beetles, perhaps adding some of these plants in and around the rose bushes would be to your advantage as well. These include:

How Not to Get Rid of Japanese Beetles on Roses

I do not recommend that anyone use the Japanese beetle traps that are on the market though. You may well be calling more than you currently have into your rose beds or gardens by using them. If you really want to use them, I would place them at the far end of your property and far away from anything they can damage.

Research that was conducted at the University of Kentucky indicated that the Japanese beetle traps attract several more beetles than are caught in the traps. Thus, the rose bushes and plants along the flight path of the beetles and in the same area of the traps placement are very likely to incur much more damage than if no traps are used.