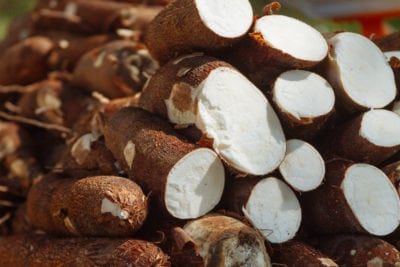 You may think that you have never eaten cassava, but you’re probably wrong. Cassava has many uses, and is, in fact, ranked fourth among staple crops, although most is grown in West Africa, tropical South America, and South and Southeast Asia. When would you be ingesting cassava? In the form of tapioca. How do you make tapioca from cassava? Read on to find out about growing and making tapioca, tapioca plant uses, and about using cassava for tapioca.

How to Use Cassava

Cassava, also known as manioc, yucca, and tapioca plant, is a tropical plant cultivated for its large roots. It contains toxic hydrocyanic glucosides which must be removed by peeling the roots, boiling them, and then discarding the water.

Once the roots are prepped in this manner, they are ready to be used, but the question is, how to use cassava? Many cultures use cassava much like we use potatoes. The roots are also peeled, washed, and then scraped or grated and pressed until the liquid has be squeezed out. The end produce is then dried to make flour called Farinha. This flour is used for preparing cookies, breads, pancakes, doughnuts, dumplings, and other foods.

When boiled, the milky juice thickens as it concentrates and is then used in West Indian Pepper Pot, a staple used for making sauces. The raw starch is used to make an alcoholic beverage that purportedly has healing qualities. The starch is also used as sizing and when doing laundry.

The tender young leaves are used much like spinach, albeit always cooked to eliminate the toxins. Cassava leaves and stems are used to feed livestock, as well as both fresh and dried roots.

Additional tapioca plant uses include utilizing its starch in the production of paper, textile, and as MSG, monosodium glutamate.

Before you can make tapioca from cassava, you need to obtain some roots. Specialty stores may have them for sale, or you can try growing the plant, which requires a very warm climate that is frost free year-round and has at least eight months of warm weather to produce a crop, and harvesting the tapioca plant roots yourself.

Cassava does best in conjunction with plenty of rain, although it can tolerate periods of drought. In fact, in some regions when the dry season occurs, the cassava becomes dormant for two to three months until the return of the rain. Cassava does well in the poor of soils too. These two factors make this crop one of the most valuable in terms of carbohydrate and energy production amongst all the food crops.

Tapioca is made from raw cassava wherein the root is peeled and grated to capture the milky fluid. The starch is then soaked in water for several days, kneaded, and then strained to remove impurities. It is then sifted and dried. The finished product is either sold as flour or pressed into flakes or the “pearls” that we are familiar with here.

These “pearls” are combined at the rate of 1 part tapioca to 8 parts water and boiled to make tapioca pudding. These small translucent balls feel somewhat leathery but expand when introduced to moisture. Tapioca also features prominently in bubble tea, a favorite Asian beverage that is served cold.

Delicious tapioca may be, but it is absolutely lacking in any nutrients, although a serving has 544 calories, 135 carbohydrates, and 5 grams of sugar. From a dietary standpoint, tapioca doesn’t seem to be a winner, however, tapioca is gluten free, an absolute boon to those sensitive or allergic to gluten. Thus, tapioca can be used to replace wheat flour in cooking and baking.

Tapioca can be added to hamburger and dough as well as a binder that not only improves the texture but also the moisture content. Tapioca makes a great thickener for soups or stews. It is sometimes used alone or in conjunction with other flours, like almond meal, for baked items. Flatbread made from tapioca is commonly found in developing countries due to its low cost and versatility.